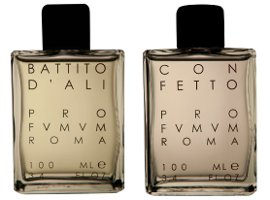 Victoria's recent post on Bois de Jasmin about Pink Sugar and the simple pleasure of gourmand fragrances inspired me to sit down with a few samples from the Italian line Profumum. Profumum currently offers more than thirty perfumes, some of them composed around floral, wood, or spice notes, but I always think of this house as being particularly focused on gourmands. I haven't tried all of them, but here are quick thoughts on four sweet-and-desserty fragrances from the collection.

I love the Profumum website's fanciful description for Confetto: "Both woman and child. Capricious and gentle like a curl in the wind, like candy floss, like a black silk petticoat raised by the swirl of the merry go round..." Confetto was released in 1996 and has notes of almond, anise, musk, amber, and vanilla. I think its name is a reference to the Italian candy confetti, sugar-coated almonds that are served to signify good wishes at weddings and other festive occasions. In Confetto, we get the almond, and we get the sugar; it's all very mouth-watering and it qualifies as a "feminine" gourmand. However, the dry down ruins things somewhat for me: Confetto morphs into a lingering cloud of vanilla-musk. And, if you accidentally spill part of a sample vial on Confetto on your sleeve and desktop like I did, you'll be smelling straight vanilla-musk for days to come.

I had better luck with the wonderfully titled Vanitas, although I don't know whether Profumum really intended that name to suggest the transience of earthly life and physical beauty as much as it does. Vanitas seems like a better rounded, less cloying version of Confetto, with notes of vanilla, myrrh, orange flowers, and sandalwood. (It dates to 2008.) The vanilla is creamy but not cloying, and the orange flower serves to brighten it. The spicy-incense myrrh is delicate, and the sandalwood is quite soft, so they complement the vanilla rather than overpowering it. I wouldn't really need a full bottle of this fragrance, since I tend to reserve vanilla for weekends or quiet nights alone at home, but if I owned a decant or travel-size bottle of Vanitas, I'd enjoy wearing it from time to time. 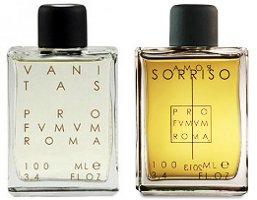 Battito d'Ali, which translates as "the beating of wings," is a lovely and evocative name for a perfume. "Immanent and transcendent!" the Profumum website reads. "Which is the scent of the fluttering angel wings? Who has ever heard it?" In 2010, Profumum interpreted angels' wings as cocoa powder, orange flowers, myrrh, and vanilla. It's a dry gourmand blend, and more androgynous than I expected (which is fitting for an angel, I suppose). However, Battito d'Ali made me think of a stale LU Pim's orange cookie: chocolate, orange jam, and a soft doughy base, turned bitter and flat. I really wanted to like it more. If you're looking for a fun cocoa-powder scent, you'd be better off chasing down a bottle of the discontinued Aquolina Chocolovers.

More recently, in 2013, Profumum launched Sorriso, a new fragrance with a composition of bitter chocolate, bitter orange, vanilla, and tropical woods. Just as Vanitas feels like a smoother, better constructed version of Confetto (minus the almond), Sorriso is an improvement on Battito d'Ali's theme. It doesn't have Battito d'Ali's strange sharp after-taste; the vanilla helps to encourage the chocolate's sweetness, without turning it into cake frosting, and the "bitter orange" note is meshed with a subtle anise and some mysterious additional aromatic-herbal note. The main problem with this fragrance, for me, is its lack of longevity — if Sorriso is a smile, it's a fleeting one. And, as for much of the line, the price seems high for compositions that aren't particularly innovative or complex. I like a guilty-pleasure gourmand as much as anyone, but to me, it shouldn't cost more than a perfume from Editions de Parfums or Serge Lutens.

Two quick questions: have you been been wearing any favorite gourmand fragrances lately? and what do you consider "too much" to spend on a guilty-pleasure fragrance like a chocolate-vanilla perfume?

Profumum Confetto, Battito d'Ali and Vanitas sell for $240 (100 ml); Sorriso sells for $265 (100 ml). All are Eau de Parfum. For purchasing information, see the listing for Profumum under Perfume Houses.