The year is nearly over, and even more so than usual, I've fallen way behind on the celebrity fragrance releases — if memory serves, Katy Perry Killer Queen was the only celebrity perfume I reviewed all year, although I did manage to try quite a few others quickly on paper. It's too late to catch up now, but here are three I spent some time with recently.

If you've smelled anything fabulous from a celebrity in 2013, do comment! Otherwise, I'm going to assume that I didn't miss much. 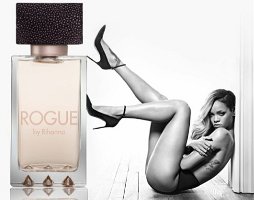 When a commenter said that Rogue, the latest from Rihanna, smelled like Bottega Veneta, it shot to the top of my "get" list, and I refused to be discouraged even by reports in the Daily Mail that it was closer to a "strong whiff of ripe peaches or peach jam, while it’s still bubbling in the pan on the hob".

And lo and behold, while the opening is fruity and sweet — I'll second the peach jam reference, with maybe a touch of apricot and a few berries for good measure — that stage is brief, and after it calms Rogue is a darned nice fragrance. I shouldn't say it's the best celebrity fragrance of 2013 given how many I missed altogether, but it's certainly the best I smelled this year, and for that matter, I like it better than my pick for 2012, Madonna Truth or Dare.

It's a floriental with clean suede-patchouli-woods base, not sweet or fruity or dark enough in the dry down to qualify as fruitchouli (if that's what you're after, stick with Katy Perry Killer Queen), but a hair sweeter than Bottega Veneta, and perhaps a hair stronger too — it's probably more of a fall / winter fragrance, although I did not find it too heavy or difficult to wear. Just enough apricot-ish jam lingers into the later stages to temper the suede. It's by far the most sophisticated of the three scents under consideration today, and the finish is reasonably sexy without being quite as over-the-top as the ad image might imply.

Do I want some? Well, I admit I'd rather have the Bottega Veneta, but I'd wear Rogue if I had it.

My second fragrance has hints of vanilla, woodsy stuff, lemon, everything great that God ever created.1

Minajesty is the second fragrance from singer Nicki Minaj, and I will start by admitting I have nothing to say about the first, Pink Friday — I'm pretty sure I tested it on a blotter, but have no memory of what it smelled like. I've seen rumors that it smelled sort of like Minajesty — if you've smelled them both, do comment.

Minajesty is a floral gourmand, and if most gourmands just aren't sweet enough for you, do give Minajesty a trial run. It's what you might get if you asked for a sweeter, fruitier, more economical version of Viktor & Rolf Flowerbomb, and then told them to tone down the warmer, darker notes in the base so that nothing would interfere with the sugar. If you like sweet and fruity, it might be just the thing. It does have a nice spicy / cinnamon-y bite to the dry down, and in all fairness, the dry down is much drier than the opening — I found the later stages far preferable to the opening.

Also in its favor: the lasting power is excellent, and while I found the Pink Friday bottle a little creepy, this one cracked me up.

One Direction Our Moment 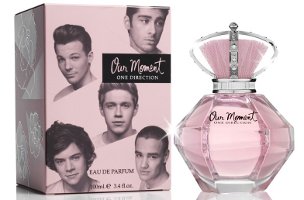 I'm guessing that Our Moment, from pop boy band One Direction, is geared at the youngest target market of the three scents I'm reviewing today, and it shows. Our Moment mostly smells like cotton candy, with a bit of fruit and a dollop of nonspecific floral, all grounded by plenty of creamy vanilla musk. It's considerably paler and pinker and "girlier" than Minajesty, and the sillage, especially in the beginning, is several degrees kinder and gentler.

Did I love it? Well, no, but you could do a whole lot worse — you could be wearing Selena Gomez Eau de Parfum, to name just one particularly egregious example. Our Moment is comparatively innocuous; if you know a young fan of the band, it would make a perfect holiday present, assuming they haven't already snatched up a bottle. The lasting power, admittedly, is just so-so.