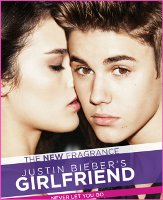 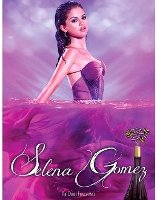 Freshly applied: Girlfriend starts off with sweet berry-ish fruit, loud enough but not as loud as it could be, with a fair sized dollop of vanilla already in evidence. While it isn't overwhelming and it's far from the worst-of-the-worst in terms of fruit 'n candy bombs, it's fuller (and a bit darker) than I would have expected for something geared this young. Perhaps this is why Bieber has described Girlfriend as "more mature" than Someday? Is his fan base growing up, or is he going after the moms? Selena Gomez, on the other wrist, is clearly after a younger crowd. It leads with screechy high-pitched raspberry with sour, almost-plastic undertones. Anyone who thinks that all these tween-oriented fragrances are basically the same would do well to smell Selena Gomez next to, well, almost anything. If we're just talking about the top notes, I'd prefer nearly any celebrity fragrance on earth, and that includes Paris Hilton Heiress.

After 5 minutes: Girlfriend has already calmed quite a bit; it smells like a variation on a sweet blackberry vanilla musk. And Selena Gomez has improved — it's a bit less screechy, a bit more chocolate-y.

After 30 minutes: Girlfriend is now more of a standard blended fruity floral, with a somewhat darker amber-musk base than the usual. It's not all that interesting, but it's not bad either. Selena Gomez smells like a blend of Tootsie Roll and sour pineapple candy plus a dash of grape soda. It has also gone sort of flat and close to the skin, which is perhaps just as well.

After an hour: Girlfriend is about what it was at 30 minutes: sweet nondescript floral notes plus vanilla musk. Selena Gomez is more of a true fruity gourmand. In the last half hour, it has become a tad creamier and a tad less fruity, and while I still don't like it, it's a huge improvement over the top notes.

After two hours: In terms of pure longevity, Girlfriend wins out over Selena Gomez, although I should mention here that I am trying both fragrances from non-spray sample vials, so your mileage may vary. Girlfriend still smells reasonably vibrant, and a bit drier and woodier than before. Selena Gomez is now faint and completely flat, but smelled up close, essentially still mimics food products I don't want to eat much less smell on my skin (ok, I do like Tootsie Rolls).

Conclusions: Nobody would expect masterpieces from this category, but if you have to spend your money on one or the other, my vote is with the Biebs. Girlfriend is obviously not the best money can buy, nor even the best fragrance to be had for its price, but it's wearable enough and I can see it appealing to a wider range of ages and tastes than you might expect from his fan base. And at least some portion of the proceeds will go to Pencils of Promise.

Of course, that is not how it works — most people will want the fragrance made by the celebrity they adore, and notably, both fragrances have glowing reviews online.

Justin Bieber Girlfriend features notes of mandarin, blackberry, freesia, star jasmine, vanilla orchid and musk. It is available in 10, 30, 50 and 100 ml Eau de Parfum; there is also a "Swept Away Hair Mist" and "Touchable Lotion".

1. When I reviewed Lady Gaga Fame, I noted that I had been unwilling to put Selena Gomez's fragrance on skin. Never say never!