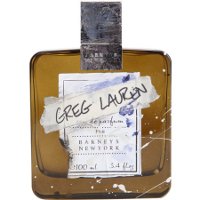 As I sit here with a spritz or two of Greg Lauren on my wrist, with a carded perfume vial and a copy of the Barneys catalogue sitting next to my laptop, I'm left wondering again how much the "image" of a fragrance should factor into a review. In this case, I don't think we can avoid it: while not exactly a celebrity fragrance, Greg Lauren for Barneys New York is inextricably tied to its namesake's identity: Lauren is a former actor, an artist-turned-designer, the husband of actress Elizabeth Berkeley (yes, she of Showgirls fame), and a nephew of Ralph Lauren, one of the most famous of all American designers with his own fragrance brand. He's photogenic and he gives a good interview.1

All this information about Greg Lauren, the personality, is relevant to the niche marketing of this fragrance, but none of it particularly interests me. I'm not even intrigued by the "one-of-a-kind" bottles, which are meant to look as though they have been sitting around an artist's studio gathering random paint splashes and scratches. This kind of post-Pollock, high-concept grunge just isn't my thing. But what about the fragrance? I'm a longtime fan of Ralf Schwieger's fragrances, and we know from his work on Atelier Cologne Vanille Insensée and Etat Libre d'Orange Fils de Dieu that he has a sophisticated touch with vanilla. It was Schwieger's name, not Lauren's, that made me want to try this new collaboration.

The good news is that I like Greg Lauren, the fragrance. It's definitely a vanilla-centered fragrance, but its other notes keep it feeling unusual and contemporary. The vanilla starts off with a boozy thread of tonka bean running through it, and it later turns softer and dustier. The "marine notes" are, most fortunately, not aquatic or ozonic in character. Instead, the marine aspect of Greg Lauren for Barneys New York reminds me of driftwood and dune grass and sea air — it's salty and sandy, and it meshes surprisingly well with the vanilla. I applied this fragrance in the morning, and for a few hours the vanilla seemed more prominent; then the marine notes really emerged; then the vanilla came back into balance. It's an intriguing juxtaposition. I've just re-read Victoria's review of Fils de Dieu on Bois de Jasmin, in which she says that the citrus/vanilla combination of that fragrance "works so well in spite of its unusual layers because of its perfect harmony." Substitute "ocean notes" for "citrus," and you could say the same thing for Schwieger's Greg Lauren.

Greg Lauren for Barneys New York could easily be shared by women and men; although many men may veer away from that distinct vanilla note, this scent would probably smell great on the right guy. It has very good lasting power and moderate sillage. Lastly, although I've made a quick visit to Greg Lauren's website and I don't really understand the correlation between this fragrance and his art or his clothing, in the end, it doesn't matter for me. I've removed my little spray vial from its labeled card and tucked it into my purse for touch-ups, since it feels just right for a cloudy and breezy autumn day, no matter what else you're wearing (or who your uncle is).

Greg Lauren Barneys New York is available as 100 ml Eau de Parfum ($195) at Barneys. It is a limited edition.

1. For example: Caroline Cagney, "Greg Lauren on His Foray into Fragrance," The New York Times, October 4, 2013.