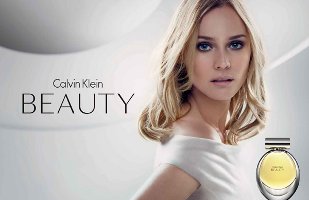 Between CK In2U, Euphoria and Secret Obsession, Calvin Klein presumably already had a modern fragrance for almost every (perfume-buying) woman on earth. But women over 40 were sadly lacking until the launch of Beauty, the latest Calvin Klein fragrance. The Calvin Klein brand, for anyone who has just arrived here from another planet, usually relies heavily on the "sex sells, and more sex sells more" theory of fragrance advertising, but for Beauty, they're clearly going for elegance: the commercial features actress Diane Kruger, fully clothed (in white, no less), talking about confidence, purity and wisdom.

Does the fragrance live up to the advertising? Well, yes, at least in the relative sense. Beauty is miles away from CK In2U (candied fruity floral), Euphoria (candied fruity vanilla cream oriental) or Secret Obsession (candied fruity hairspray oriental). There's less fruit, and less candy, although if you like fruit and candy you'll be happy to know there's a bit of each in the the top notes. After that, it's mostly a floral, straight up, although exactly what flowers make up the floral are hard to say. It's advertised as a "neo-lily" (calla lilies are featured in the advertising images), and jasmine is also listed in the notes, but whatever flowers might be in the mix have been aggressively smoothed over, in the modern style: if you have been testing any mainstream department store florals lately, you'll recognize the smell as "mainstream floral perfume". The base is a warm but clean woody musk, not too dark and not too light.

I don't know that I'd call it elegant, but it is pretty, and of course pretty is better than not pretty, right? We have, in fact, had several discussions here lately about whether or not "just pretty" is enough, although I might start by saying that the fragrances that started those conversations were, in all truth, considerably higher up on the pretty scale than Beauty. Beauty is not breathtakingly pretty, and it is not, I don't think, going to make any perfumistas anywhere swoon with delight. There is nothing really distinctive or interesting about it: it's just adequately pretty and wearable, and my sentiments are firmly with the reviewer on MakeupAlley who noted that "elegant and sophisticated shouldn't mean dull".1 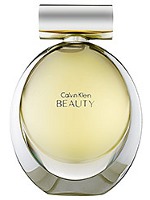 1. Although I should also note that she gave Beauty 4 stars out of 5.