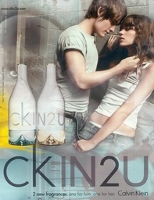 CK IN2U is the latest attempt by Calvin Klein to recapture the massive youth market that they so perfectly cornered with 1994's CK One. Even back in 1994, I was not quite the "disaffected, sexually ambivalent grunge youth of the moment" cited as CK One's fan base in a recent New York Times article, but I thought CK One was great stuff: the packaging was different, the advertising was different, and it smelled different. Mind you, I was not "into" perfume at the time; if CK One was derivative of other fragrances on the market, I was blissfully unaware of it.

Fast forward to 2007. I am older now, and if you want to know just how old I am, perhaps you'll find a clue in the fact that my first thoughts on seeing the print ad for CK IN2U were that geez, she really ought to pull her pants up, and has he finished his homework yet? The reaction of the target market itself has been less than cordial, in fact, the backlash against the whole project was vocal even before the scents launched, based largely on the advertising copy ("She likes how he blogs, her texts turn him on. It’s intense. For right now.") Of course, back when CK One launched, there weren't the same kinds of public forums (blogs, MySpace, what have you) in which to protest being "marketed down to", so it is hard to know if CK IN2U is really getting a worse reception or if there are simply more (and easier) ways to register disgust. Regardless, CK IN2U has succeeded in capturing plenty of attention, and in today's crowded fragrance market, that would seem to be half the battle.

So, on to the real point: what do they smell like? Well, CK IN2U Him is my favorite of the two, so I'll start there. It was created by perfumers Bruno Jovanovic & Jean Marc Chaillan and the notes are citron vert "Gin Fizz", pomelo leaves, frosted tangelo, Cacao bean, Jamaican pepper, shiso leaves, white musk, white cedar and "ultra-vetiver". As advertised, it has a nice spicy-fizzy opening with lots of citrus and pepper; the foody notes in the heart are rather subdued (the chocolate is noticeable without being overdone) but add some interest to the proceedings. I was expecting something ultra-earthy from the ultra-vetiver, but it is more watery-fresh than earthy. The dry down is the largely the same clean musk you find in CK One, rendered cleaner, soapier and warmer in the CK IN2U, and accented with a touch of vetiver and some pale woods.

Like its parent, CK IN2U Him is perfectly pleasant and wearable. If all goes well for Calvin Klein and it starts selling like gangbusters, it won't kill me to smell it everywhere. CK IN2U Her is another story. It was created by Loc Dong & Carlos Benaim; the notes are pink grapefruit, bergamot, currant leaves, sugared orchid accord, white cactus, neon amber, vanilla souffle and red cedar. All I can say is this: if the young women of today want to protest something, ignore the ad copy (all fragrance ad copy is inane, and this is hardly the worst) and focus on the product — tell the man, bring me something new. The minute I smelled CK IN2U Her on a card, I was sure I had smelled it before; unfortunately, I don't have the time or energy to test it next to the 500 candy-sweet fruity florals that were released in the past year so I can't tell you exactly what it was, and really, what is the difference? The progression is always the same. Start with some achingly sweet fruits, throw in a dash of bright citrus (screechingly high pitched, in this case), add a blur of unrecognizable flowers in the heart, finish it off with some pale musky woody stuff, more clean than not, and a big dollop of vanilla.

In this case, the musky stuff is also reminiscent of CK One, but it is harder to pick out until the fragrance calms. Once it does, CK IN2U Her is mostly lightly toasted vanilla sugar and musk. As with its male counterpart, the dry down has a nice warmth, and truth be told, it is probably no better or worse than CK IN2U Him, but as I spend a lot more time testing women's scents than men's its utter lack of originality was both more obvious and more annoying. They will be hard pressed to find anyone who thinks it is something new and exciting unless they market to girls too young to have shopped in Sephora or to have tried the latest celebrity fragrance releases. But it is probably as pleasant and wearable as others of its ilk, and since this stuff seems to sell, I imagine CK IN2U Her will do ok.

Whether the duo will ever manage to match CK One's 20 bottles sold-per-minute is another matter. The fragrance market is considerably more crowded with product than it was in 1994, and the IN2Us don't strike me as being different enough from what is already out there to capture any massive amount of interest. And am I off base in finding that print ad a bit, well, dull? It doesn't strike me as anywhere near as compelling as the ads for CK One. The bottles are awfully cute, but if I find them so at my advanced age, perhaps that is a bad sign for CK IN2U as well.

Do comment, and please, somebody tell me what is the current slang for old fogey?