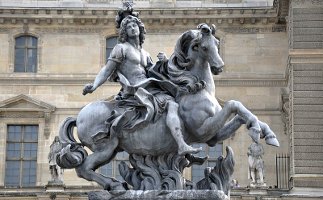 Fleur de Louis was released by Arquiste in 2011; it is a woody floral with notes of orange blossom, orris and white cedarwood, developed for Arquiste by perfumer Rodrigo Flores-Roux, who has created several scents for this house.

Like all Arquiste fragrances, Fleur de Louis takes its inspiration from a historical moment. Its name refers to Louis XIV, the "Sun King" who ruled France from 1643 to 1715. Its story is the first meeting between Louis and his intended wife, Maria Theresa of Spain. In June 1660 the young king and his bride were brought face-to-face "under  a newly assembled pavilion of pine and cedarwood on the French-Spanish border,” as Arquiste describes the setting. Fleur de Louis's composition is designed to evoke that meeting place on the Isle of Pheasants, as well as the iris-scented creams and floral waters that were favored by Louis and his courtiers.

I feel as though I'm experiencing this fragrance at just the right time of year, as spring is making way for early summer. On my skin, Fleur de Louis opens with a heady wave of springtime floral notes that remind me of lilac and wisteria, even though neither flower is mentioned in the official description. These powdery-musky blooms and their sharp greenery persist for a while before gradually deepening into a heart of dusty-gray iris and soft, smooth wood notes. The orange blossom note is fleeting, to my nose; it does add a ray of light to the proceedings, but overall, this fragrance is painted in cooler, duskier tones than I expected. It does seem to suggest Louis as a younger monarch, rather than "le Roi Soleil" enthroned in all his glory at Versailles.

Fleur de Louis is not as dramatic as Arquiste's Flor y Canto or Anima Dulcis, but it's more my style, and I'd wear it regularly if I owned a bottle. Like Aleksandr, it has a restrained yet sophisticated presence. It feels like an old-fashioned "perfume," in a good way; the ingredients smell high-quality and the composition is elegant and trend-proof. It's also more feminine than I would have guessed; at least, feminine in twenty-first century terms. I know that tastes have changed over the centuries, and that men commonly wore floral scents in the seventeenth and eighteenth centuries. Louis XIV himself probably would have enjoyed Fleur de Louis just as much as I do. 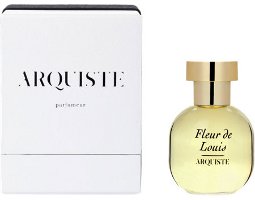