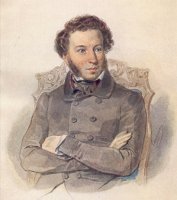 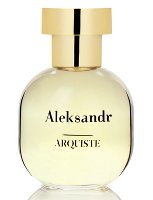 I'll confess: I had little interest in trying the Arquiste line when it was first announced. Another day, another high-priced niche line with exclusive distribution, historical-geographical references, and minimalist bottles; right? But my curiosity was piqued by Kevin's review of Flor y Canto and Anima Dulcis, so I sniffed one or two selections during a visit to Barneys; and then I noticed that the newest addition to the line, Aleksandr, was a tribute to the Russian poet Alexander Pushkin. I have fond memories of reading and re-reading Pushkin's verse-novel Eugene Onegin at one point in my overly prolonged years of education, so I needed to give this fragrance a closer look.

Aleksandr was developed with perfumer Yann Vasnier and includes notes of neroli, violet leaf, fir balsam, Russian leather, and ambrette. It is designed to tell the story of the last day of Pushkin's life, when the famed writer was mortally wounded in a duel in 1837. The neroli and violet are meant to evoke the hero's morning toilette, the leather to refer to his gloves and boots, and the fir balsam to evoke the winter landscape around St. Petersburg. I occasionally get irritable when I see literary or cultural references haphazardly grafted onto a fragrance that doesn't deliver on its promise (can you recall any recent example?), but in Aleksandr's case, the story is seamlessly joined to the scent.

Aleksandr opens with the sort of classical violet note that makes me sigh with delight. (I also enjoy this reminder that men commonly wore violet fragrance in the nineteenth century.) It doesn't dominate for very long, but the olfactory narrative continues to unfold smoothly: there's the neroli that might have scented our hero's gloves, and the smooth, fine leather of the gloves themselves. There's a breath of chilly air, with snow in the forecast, and the resiny darkness of fir needles on trees and underfoot. The neroli reappears later in the fragrance's development (would the duelers remove their scented gloves in order to shoot?), adding lightness to the base of balsam and leather and subtle amber. There may even be a trace of gun-smoke emerging from the resins, or perhaps I'm just very suggestible.

To summarize, Aleksandr is a dry, elegant composition. It's well-mannered but not dull, and it could be worn by men or by women who enjoy some (but not too much!) leather in their fragrance. I don't usually wear leather-based compositions, but I'm learning that I do enjoy a refined leather accord when it appears in the company of a floral note or two. (L'Artisan Parfumeur's Traversée du Bosphore is another case.) Aleksandr has good tenacity and moderate sillage, and it feels appropriate for a wintry day, worn with a long coat and high boots and a fur scarf. Leave the pistols at home, though.

(Arquiste has assembled a set of still-life images for each of its fragrances; see the "Curiosities" tab on the Arquiste website to browse the photographs, details, and explanations.)

Arquiste Aleksandre is available as 55 ml Eau de Parfum ($165). For purchasing information, see the listing for Arquiste under Perfume Houses.