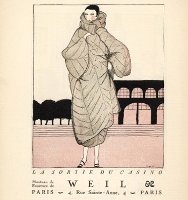 In searching for something to review this week, I dropped by Nordstrom for a sample of Valentino Valentina Assoluto. I’d peeled open its scent strip in Vogue and read its notes, and it sounded alluring — warm, earthy, and sultry with a truffle note. But the real thing? Valentina Assoluto was the epitome of a bad mall fragrance, shrill and off-putting, exactly what I fear encountering in elevators. I left my sample in the garbage at work.

But it spurred me to think, what makes a sultry perfume? Has our definition of seductive scent changed so much over time? I reached for some Weil Zibeline and spritzed. Now that’s what I call a comfortable yet sexy fragrance: a diffuse top, complex warm and spicy heart, and sweet, animalic drydown. Valentino et al, take notes.

Weil Zibeline, by perfumer Claude Fraysse, was released in 1928, a year after the Weil fur company opened. Zibeline, which means “sable” in French, was one of several fragrances Weil released over the years with fur names, including the celebrated Antilope. (Old-time perfume blog readers will remember that Scentzilla had a marvelous write-up of Weil. Scentzilla has now disappeared, and the site has been taken over by marketers! Let's take a moment of silence in remembrance.)

Zibeline morphed over the years, and this review is from a bottle of Zibeline Parfum de Toilette that, from its packaging I’m guessing is from the 1960s. My Zibeline is an aldehydic herbal-floral-animalic-woody wonder of abstract perfumery. It goes on in a sneezy puff of herbs and bergamot before quickly segueing into a spicy-floral heart rich with what smells to me like ylang ylang, dirty orange blossom, iris, rose and a dash of cinnamon. I know a dozen more flowers might be blended into it, too, but it's seamlessly composed.

Underlying Zibeline’s heart is a slightly mossy honey-sandalwood and cedar-spiked base ruffled with civet, musk, and tonka or vanilla. Its horsey-animalic aura reminds me of Mona di Orio Nuit Noire after the challenging top notes have died down. At this point, Zibeline retreats to the skin and purrs wood, spice, and civet.

Which brings us to Weil Secret de Venus. I have three samples of Secret de Venus. One is from a new bottle and is the flat Zibeline I told you about. The other two are Secret de Venus parfum pour le corps and are greener and more floral than Zibeline. I’m not sure what vintage they are.

Secret de Venus was released in 1933 and smells like an ylang ylang, jasmine, carnation, and rose-lush sister to Zibeline. Where Zibeline tempts with solid edges cloaked in velvet, Secret de Venus seduces with spicy-floral roundness. It’s much less animalic than Zibeline.

The original Secret de Venus oil — not the Zibeline remake — is long discontinued, but had I been around when it could be readily found, I know I would have used up gallons of it to smooth on after my bath.

Valentina Assoluto is $117 for 2.7 ounces. On ebay, a 4-ounce bottle of Weil Zibeline similar to the one I have — although the design on my box might be a little older — is $65. To those seeking sophisticated but warm and easy sultriness, it’s no contest.