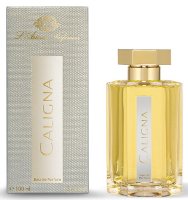 When acquaintances who want to know more about perfume ask me for recommendations, I often suggest a visit to a L'Artisan Parfumeur counter. L'Artisan was the first "niche" fragrance house I ever experienced, back in the 1990s, and it's still one of my favorites. Lately I've been watching with interest as L'Artisan has been highlighting certain long-standing aspects of its brand identity, perhaps re-asserting its rightful place in an increasingly crowded market. Since late 2012, for example, the company has been "telling the story of French perfumery" with its "Grasse Collection" of candles, scented gloves, and — starting now, with Caligna — fragrances.

Caligna "draws inspiration from the spiritual home of fragrance" — the countryside around Grasse — and its name reportedly comes from the word meaning "to court" or "to flirt" in the Provençal dialect. L'Artisan describes Caligna as "a woody, aromatic fragrance" with notes of clary sage, fig, jasmine marmalade accord, lentisc (the shrub that produces mastic resin) and pine needles; it was developed by perfumer Dora Baghriche-Arnaud.

All of Caligna's notes are inspired by the landscape and vegetation of Provence, and it's a refreshing take on the region, free of any clichéd lavender-sachet associations. It does what it promises, in a very typically L'Artisan style: it brings together ideas of Mediterranean forests and hillsides and coastline  in a sophisticated, impressionistic way. Caligna's opening is almost citrusy on me, with a hint of bergamot. After that, the composition's notes are difficult to separate. The clary sage is more subtle than you'd expect, especially if you've ever inhaled clary sage essential oil; the jasmine is airy and breezy, and the fig note is a light, creamy fig. The pine needles are dried and sun-warmed rather than dark and green. The base features an almost delicate resin, like the underbrush of lentisc shrubs; you've left the sunlit flower fields and stepped into the forest, but it's still not a dark place.

Overall, Caligna is lighter in "color" and "texture" than I anticipated; if you're looking for an earthy, rooty take on the South of France, this scent will seem a little pale to you. It's a smooth, wearable interpretation of a particular landscape, and in that sense it also reminds me a little bit of Hermès's "Garden" line (Un Jardin en Méditerranée and the rest). It's well-crafted from high-quality ingredients and it feels like a "niche" fragrance in the best sense of the word. It could easily be worn by either men or women and it seems timed well as a spring release.

So how do I feel, personally, about Caligna? I like it, although it's not really my style — I gravitate more towards L'Artisan's powdery/floral/sweet offerings, from Bois Farine and Traversée du Bosphore to Oeillet Sauvage (discontinued) and Drôle de Rose (now available only in Paris and online). However, if you're a fan of sheer herbaceous-resin fragrances, or if you've always loved Premier Figuier but could use something a little lighter in your fig-fragrance collection, you may love Caligna. I think I'd probably sooner splurge on one of L'Artisan's new Grasse-themed candles (you can see a nice little video about them here) — but again, our tastes may vary!