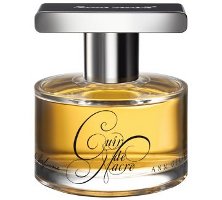 Ann Gérard Cuir de Nacre is one of my favorite types of fragrances — a leather chypre — by one of the perfumers whose work intrigues me most, Bertrand Duchaufour. When I opened my decant, I wanted to be swept away by Cuir de Nacre’s beauty. But then again, it wouldn’t be so terrible if it smelled enough like other leather perfumes to spare my wallet.

I've worn Cuir de Nacre for a week and half now. Does it deserve a spot on my “must have” list? Here are my criteria and how Cuir de Nacre matches up:

It must smell divine. Cuir de Nacre’s notes include angelica root, ambrette, aldehydic ozonic notes, cassie, iris concrete, leather accord, sandalwood, white musk and styrax. Cuir de Nacre’s soft leather and iris ride in on a cloud of aldehydes with a tickle of peppery angelica root. As the fragrance settles, the cassie (also known as mimosa) adds its strange and slightly fetid buzz to the mix. And is Cuir de Nacre ever mossy. Moss lovers will definitely want to sniff how moss cushions the fragrance, puffing and peeking out like a crinoline a touch longer than its suede skirt.

Now let’s deal with Cuir de Nacre’s white musk. It’s definitely there, soaping up the perfume’s heart, but not aggressively. At first, I wasn’t sure how I felt about the musk. After all, for me it was the white musk that sank Guerlain L’Heure de Nuit. Why did Duchaufour have to take such a velvety skin leather and give it a whiff of shower stall? Then I grew to appreciate how the musk adds a casual touch of modernity. The musk surprises, subtly, and is restrained enough that Cuir de Nacre’s moss, sandalwood, and leather more than stand up to it. This fragrance is cannily blended.

Cuir de Nacre would be as natural on a man’s skin as a woman’s.

It should fit into my life. I love lots of fragrances that simply don’t jive with my life. I know lots of you revel in wearing big, glamorous fragrances in your jeans, but it knocks me out of sync. Cuir de Nacre is elegant but not snooty. You don’t have to wear pearls to pull it off, but it smells like you might have a Duchess somewhere way back in your family tree. Also, Cuir de Nacre isn’t a statement perfume. Most people probably won’t notice it, but will unconsciously register an interesting, broken-in warmth when you're around.

It should differ from other fragrances I own. Of my softer leather fragrances, DelRae Mythique is saltier and more youthful; Chanel Cuir de Russie is sharper and more animalic; Lancôme Cuir de Lancôme is wetter and more floral; and Serge Lutens Daim Blond is, well, more Serge with its cedar and apricot.

It should have appropriate sillage and wear time for the type of fragrance it is. Cuir de Nacre is quiet. It melds with my skin, making me smell less like perfume and more like I’ve been sleeping in a leather trunk on a bed of peppery iris and moss. If I spray it on at breakfast, it’s gone by mid-afternoon, despite being Extrait de Parfum. I wouldn't mind a little more persistence.

It should be worth its cost. Cuir de Nacre costs $165 for a 60 ml bottle of Extrait de Parfum. Not cheap, but not ridiculous — many of the 100 ml L’Artisan Parfumeur Eaux de Parfum cost the same. Given how interesting Cuir de Nacre smells, and how often I can imagine wearing it, its price is plenty fair.

Verdict? When my decant runs dry, a bottle will be mine.