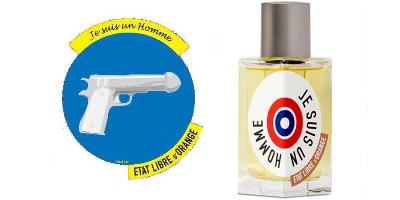 Over the holidays spent at home, I found myself wearing LOTS of perfumes — named Chanel No. 5, Jean Patou Joy and Dior Diorissimo (vintage, both), Molinard Habanita and Lalique de Lalique. All of a sudden, I felt I needed to stop shaving, to put on some work boots, and to wear a manly cologne — nothing fancy, but a salt-of-the-earth, dare I say, conservative fragrance. I reached for Etat Libre d’Orange Je suis un homme.*

I tried Je suis un homme years ago; it was like-at-first-sniff. And what’s NOT to like? Though its emblem is a penis-barreled gun, Je suis un homme is a comforting scent to me…not menacing in the least. Je suis un homme is masculine, warm and fuzzy; it's sexy, but I don’t like to write the word ‘sexy’ in connection with a gun (Etat Libre d’Orange: retire the penis-pistol...if you want another penis besides the spurting one used in the Sécrétions Magnifiques ad copy, make it less aggressive, maybe zero in on the naked crotch of an ancient Greek or Roman sculpture?)

Je suis un homme’s opening is bracing, with aromas of citrus, crushed cloves and birch tar, creating a scent I’ll call “stomping through a wet woods.” This slightly bitter, “tough,” herbal-smelling opening begins to sweeten quickly (not a gourmand sweetness, but a liquor-y amber sweetness). As Je suis un homme enters its heart, I detect smooth leather mixing with resinous myrrh and the cognac accord…this is a relaxing-on-the-sofa moment that leads to the fragrance's  finale of woody patchouli, vanillic notes and not-too-clean musk. This speedy scented movement from the Great Outdoors to the Great Couch is as manly a progression as most guys can manage these days, especially in the city. (We won’t sully the semi-butch scenario by mentioning the view from the couch may well include Downton Abbey or some ‘reality’ trash from Bravo TV.)