Take a look at the output of the Issey Miyake perfume house — it's mostly a long string of flankers and variations on 1993's L'Eau d'Issey. I included L'Eau d'Issey in 25 more fragrances every perfumista should smell, but let's face it: some classic perfumes smell better with every passing year, others, eventually, just smell dated. In the case of L'Eau d'Issey, I wholeheartedly second Tania Sanchez when she says it “reminds us mostly of Windex now”.1 The brand did make a recent attempt to find a new pillar with 2009's A Scent By Issey Miyake, a nicely done if not terrifically exciting fragrance. I liked it well enough but it failed to steal my heart, and as near as I can tell, it did not come close to threatening L'Eau d'Issey's status as the cash cow of the Issey Miyake brand.

So, on to the new Pleats Please, developed by perfumer Aurelien Guichard. I adored the bottle2 as soon as I saw it, and I adored it even more in person than I did in pictures (it usually works the other way around). The advertising is likewise perfect (here's the commercial if you missed it). So I had sort of high hopes, tempered by the news that it was a fruity floral with pear.3 I also had a long wait; as so often happens now, we stood by while Pleats Please launched everywhere in the world but the United States. There's already a stronger version out elsewhere (Pleats Please L'Elixir) and we've just recently gotten the first installment.

What does it smell like? Well, really it smells like a fruity floriental more than a fruity floral, but yes, with pear. The opening is sweet and heavy instead of light and sparkling, and has an overtly synthetic vibe that struck me as rather unfortunate.4 That, along with some of the heaviness, lessens a bit as Pleats Please dries down on skin. The heart is a sweetish fruity-musky thing, with the usual nondescript "flowers" rendered a tad dusky by a dab of ultra-clean patchouli. Pleats Please vaguely recalls too many other perfumes to name, but a persistent undertone of "chemistry lab" sets it apart from its competitors in the pink 'n fruity genre. The base starts slightly powdery and gets more so over time; it has a touch of spice but is otherwise your standard dryer sheet (the notes, in case it helps, are Nashi pear, peony, sweet pea, patchouli, vanilla, cinnamon and white musk).

Verdict: The majority of the reviews I've seen have been positive, some even glowing, so do bear that in mind and give it a shot. As for me, I pretty much hated it. Someone on the fragrance board at MakeupAlley mentioned the "awful sanitary towel-spicy base" and that pretty much sums up how I feel about Pleats Please. In the end, the pear was not really the issue — there are many pear perfumes that I diss for smelling like shampoo, but Pleats Please does not smell like shampoo, it just smells bad, and the leaden way it sits upon the skin seemed laughably at odds with the flowing, graceful movement implied by the advertising and packaging. I will say that the lasting power is excellent, especially for an Eau de Toilette. 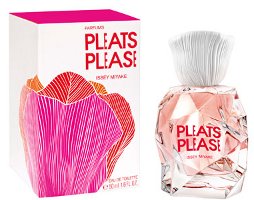 2. The bottle and the perfume are meant to honor the Issey Miyake Pleats Please fashion collection the brand established in 1989. I should note that comments about the bottle were mixed — some people really hated it. One reader's take: "It looks like a box of tissues in my grandparents house that they put some bedazzled homemade cover on."

3. I do have lots — really! — of friends who are fruity florals, but can't offhand name a pear-heavy fragrance I like. You should, of course, never judge a perfume without smelling it, and notes are often misleading, but a fruity floral with pear + peony does not sound delicious to me.

4. Of course, sometimes "overtly synthetic" works. Sometimes it doesn't. In this case, I was reminded of Angela's take on Lanvin Rumeur as "a thin, pink acrylic nightie that unravels in the wash." Reader Jonr951 noted in the comments to the Pleats Please announcement that it smelled "like a nail salon", and that's especially apt for the top notes.