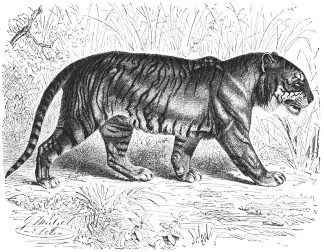 Before the early part of the 20th century, (truly glorious) Bengal tigers were not endangered; but even if you feel it was acceptable to slaughter hundreds, thousands, of magnificent animals for “sport” (or for body parts used in folk medicines), tiger hunts devastated local economies in India. As huge maharajah-led or British-sponsored hunting expeditions traveled through the Indian countryside — elephants, horses, carriages and marching men damaged farmlands and woodlands. To feed the large numbers of men, women and animals traveling in the procession, provisions and livestock were cheaply bought (or stolen outright) in villages along the route; the tiger-hunting parties often left hunger and poverty in their wake.

What’s next from Parfum d’Empire? Sherman’s March? “Savor the aromas of crumbling marble and smoking timbers, the animalic odor of raging horses, the dusky scent of gunpowder, the muskiness of sleepy soldiers — all mingling with the sultry fragrances of Southern magnolia blossoms, Confederate jasmine, and gardenia buds….”

Fougère Bengale contains lavender, tarragon, patchouli, geranium, tobacco, tonka bean and vanilla. Fougère Bengale starts with a blast of rich green-herbal notes; you can smell lavender, but its floral aspect is masked by ‘greens.’ The green notes quickly ‘dry’ and a straw-honey-uric accord emerges (has the Bengal tiger marked his territory?) Fougère Bengale transitions from the honeyed and patchouli-tinged straw note into a cured tobacco leaf aroma (the scent of a freshly opened package of cigarettes). The mellow tobacco note lasts a good while on my skin and endures into the vanillic, slightly powdery, warm and cozy dry down.

Tom at Perfume Smellin’ Things noted a resemblance between Fougère Bengale and Annick Goutal’s Sables, and I agree with him. I’ve owned two 100 ml bottles of Sables and used every drop, but if Fougère Bengale had been around, I would not have bought my second bottle of Sables. Fougère Bengale, on my skin, has more complexity and clarity than Sables (which can stall in its development and send out unvarying wafts of immortelle, and can turn bitter and murky during the dry down). Other reviewers have mentioned the presence of “maple syrup” and “gingerbread” accords in Fougère Bengale; the fragrance does have a sweet base, and perhaps even a driblet of immortelle, but my nose doesn’t detect anything distinctly foody.

As for my mini-rant about Parfum d’Empire and Bengal tiger hunts? No doubt, many of you want to shake me, or toss a glass of cold water in my face, and say: “This is perfume — not a rifle! Get a grip!” I’m not angry with Parfum d’Empire or its creator, Marc-Antoine Corticchiato; I’m world weary. It’s 2007; Bengal tigers and their habitat are disappearing; and there are still large numbers of people on this earth who believe eating a teaspoonful of crushed tiger bones will make them “tiger-like” and cure their ailments, but who are too ignorant to realize their “need” for such “products” leads to the extinction of what they prize and emulate — tigers. I wish Parfum d’Empire had left the word “hunt” out of Fougère Bengale’s ad copy; otherwise Fougère Bengale is perfect as-is.