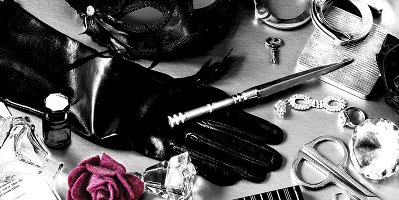 Perhaps a day will come when I tire of wearing (and writing about) rose perfumes, but that day has apparently not arrived yet. This week I've been sampling Rose Anonyme, a fairly recent release from niche fragrance house Atelier Cologne. Rose Anonyme is personified as "a breathtaking seductress caught in a stolen affair between light and dark," in a narrative about a (female) jewel thief who leaves nothing behind except a rose and the scent of her perfume.

This fragrance was developed by perfumer Jérome Epinette and features top notes of bergamot, ginger and Turkish rose essence; heart notes of Turkish rose absolue, incense and velvet oud accord; and base notes of patchouli, papyrus and benzoin. Rose Anonyme is definitely rose-centered, but nothing else about it was quite what I expected. Not that it's a shocking fragrance in any way: it's actually quite pretty. It's the most feminine Atelier fragrance yet, released in tandem with its masculine companion Vétiver Fatal. I think I'd gotten used to Atelier releasing shared-gender scents, so that surprised me a bit. In addition, the notes I expected to notice most in Rose Anonyme, the ginger and the oud and the patchouli, weren't the ones that made a strong impression on me.

Rose Anonyme begins on a more gourmand note than I would have anticipated: the benzoin may be listed as a base note, but it appears early and lasts throughout the fragrance's development. This almost vanillic note pairs nicely with the lush rose accord — I'm definitely visualizing a red rose! — for a velvety effect. If I inhale more closely, I detect a sharpish bergamot and some sheer oud and even sheerer spice. The oud and spice keep Ms. Anonyme from acting like too much of a sweetheart, but she never really turns naughty or mysterious, either.

This fragrance had above-average staying power for me: it seemed to warm and waft off my wrists and neck throughout the morning, giving off a bouquet of rose and ambery spice (and still some benzoin), and although it had less sillage in the afternoon, it was still present as a subtle layer close to my skin. It never got as earthy or exotic as I expected; if you're in the market for a dirty rose, you should probably seek out something like The Different Company's Rose Poivrée, or By Kilian Rose Oud, or even some of Jérome Epinette's other creations, like Byredo Rose Noir or Fresh Cannabis Rose. For a patchouli-rose blend, L'Artisan Parfumeur Voleur de Roses would still be my pick, and for a sophisticated rose with light oud and gourmand notes, I'd recommend Neela Vermeire Creations Mohur.

But if I had to do an "if you like this, you'll like that" comparison, I'd say that Rose Anonyme would be a perfect choice for someone (like me) who used to love Bond no. 9's West Side but now finds it just a little too cloying; if West Side slimmed down a bit and picked up on the oud trend, it would recognize Rose Anonyme as a close relation.

I still can't say that I enjoy Atelier Cologne's recent releases as much as the brand's original collection, but Rose Anonyme is nicely done, and I'm always happy to see another good quality rose on the market. 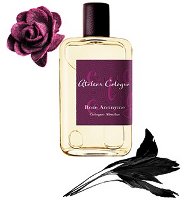 Atelier Cologne Rose Anonyme is available as 30 ml ($75), 100 ($130) and 200 ml ($195) Cologne Absolue ("concentrated at 18%"). A matching soap and candle are also available. For purchasing information, see the listing for Atelier Cologne under Perfume Houses.