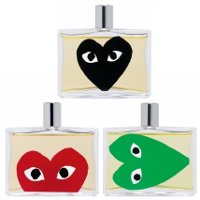 That was a quick summary I wrote when I reviewed A New Perfume [real name: Comme des Garçons Eau de Parfum] early this year, and since I didn't love A New Perfume, or whatever you want to call it, it still stands. They've done four fragrances since then: a trio for their Play diffusion line, and the new Amazingreen for the regular line. In keeping with my penchant for giving away the ending, I didn't wholeheartedly adore any of this set either, but I liked all of them better than the New Perfume thing.

Comme des Garçons' Play line launched in 2002, and features t-shirts, cardigans and other casual basics / accessories; most of the clothing would look like it came from the Gap but for the addition of the Play logo — the red heart with eyes that they also used on the first Play fragrance (2007). That fragrance had a likewise "casual basic" feel, which carries over into the new trio — Red Play, Black Play and Green Play, all developed by perfumer Antoine Maisondieu.

Red Play is arguably the most fun of the trio. It opens on peppered red fruits, more tart than sweet, with a brief flash of cherry cough syrup. What starts as a slight almondy undertone gets sweeter (but never too sweet) and closer to marzipan as it dries down, and is joined by an overdose of dusty cinnamon; with the fruits and the sheer flowers and the pale woody base, it has the air of a lively but grown-up almost-gourmand. Hours after application, it smells like a dry cinnamon biscuit, the sort of thing you might dip in your coffee. It's lightweight enough to wear in any season, and it has reasonably good staying power. The more I wore it, the more I liked it, still, I never fell completely in love — I'd certainly wear it if I had a bottle, but so far, it's not going on the buy list. Then again, we'll see what happens when I sort my samples — this one might end up in the purgatory basket for another try in the future. (The notes: red mandarin, pink pepper, safraleine, red cherry accord, geranium, cinnamon, osmanthus, myrrh and balsam of Tolu).

Black Play ought to be more my sort of thing — it's a peppery-spicy incense with hints of black tea. It's the most Comme-des-Garçons-ish of the trio, but like the others, has a lightweight, casual vibe all the same, albeit a bit more masculine than Red or Green. I would like it better if there wasn't already so much competition in the "quiet incense" category, much of it, of course, from Comme des Garçons. Every time I wore it, I thought: yes, that's awfully nice, but I've already got that genre covered. If you don't, give it a shot. (The notes: black pepper, pepperwood, red pepper, violet, thyme, black tea, birch tar, incense and tree moss.)

Green Play was my least favorite, which is not to say that I didn't find it enjoyable — it's minty, green and fresh, rather mild, and perfectly wearable. It reminds me of a less sparkling Guerlain Herba Fresca. Its drawbacks: it's too bland once the mint calms, it's easily the least quirky of this trio, and the lasting power in general is poor. I wore it next to Comme des Garçons Calamus, and it simply couldn't compete, and since I've also got glories like Gobin Daudé Sous Le Buis in my collection, I don't think I'd reach for Green Play even if I owned it. If you like your greens mild, it might be right up your alley, then again, even for a mild green, I'd prefer something like Chanel Bel Respiro or Maison Martin Margiela Untitled. (The notes: nanah mint, lime, juniper berry, basil, jasmine, mastic tree, abelmoschus, vetiver and cedar.)

Verdict: I was not at all impressed with this trio the first time I tried it, but later wearings have changed my mind. They're quite well done, and any of the three is a better fragrance — and a better fit with the brand — than the original Play fragrance. Very worth a try, even if none of them swayed me in the end. 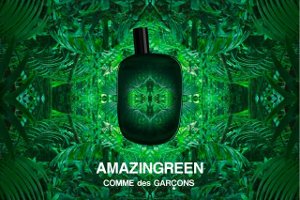 Two green fragrances in one year from the same brand seems an embarrassment of riches, and a green with gunpowder notes? In the lovely Comme des Garçons signature pebble bottle? Sign me up.

As it turns out, Amazingreen, while quite green, is not to green as Wonderwood was to wood, that is, it is green, but not GREEN! GREEN! GREEN! Since I didn't love Wonderwood anyway, I ought not to complain, but of course, complain I will.

Amazingreen starts off, well, green, but also watery-fresh — that "dew mist" listed in the notes is rather pronounced, and it gives Amazingreen the same "fresh" feel as any one of the bazillionty men's fragrances now on sale at Macy's (also listed: palm tree leaves, green pepper, jungle leaves, ivy leaves, orris, coriander, silex, gunpowder accord, vetiver, smoke and white musk). It comes closer to the bitter "stems and crushed leaves" sort of green I hoped for as it dries down, but the gunpowder accord and smoke is subtle at best, and there really isn't anything else here to set Amazingreen apart from any other "green" on the mainstream market — it just smells like your basic sort of green, unisex verging on masculine, mostly clean, mostly fresh.

Verdict: Amazingreen is fine, but perhaps because of the dew mist stuff, I preferred the Green Play. I will second the Twitter summation from Fragrant Reviews:

Comme des Garçons Amazingreen was developed by perfumer Jean-Christophe Herault. It is available in 50 ($95) and 100 ($125) ml Eau de Toilette. For buying information, see the listing for Comme des Garçons under Perfume Houses.