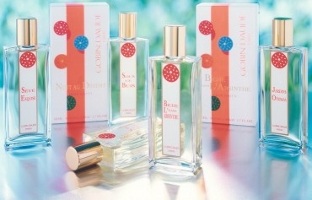 Sous Le Buis starts with a sharp, bitter green, very much like the smell of crushed leaves and stems and sap. As it dries down, the lavender intensifies along with the herbal notes. I usually find lavender in fragrance to be too harsh, but here it is very soft and smooth. There is a bit of orange blossom, and some light woody undertones.

It is a dry green fragrance, and while it is not dark exactly, it has none of the bright freshness of many green scents, like Miller et Bertaux no. 3 or the newer version of Vent Vert. The green here is deeper, and in keeping with the ad copy, the feel is rather like being buried in shrubbery. I adore it, but it probably won't suit you unless you really love green. It is a unisex fragrance; many of the reviews I have read find it to be closer to masculine.

Sous Le Buis is an Eau de Toilette, and the lasting power is reasonable. I confess that I have no idea what is going on with the Gobin Daudé line. It has been rumored for some time that she has two new fragrances in the works, but in the meantime, the line has just about disappeared from the US. Fortnum's in London had the line on markdown recently, but I don't know if they still have any in stock. Brown's (update: no more!) still has the entire line available online, at full price.

When the line was still available in the US, a 50 ml bottle ran $140. As much as I admire the perfumes, I balked at the price. In the end I got my bottle of Sous Le Buis at Takashimaya for $19, and I doubt such a bargain will ever come my way again.