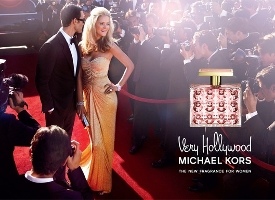 Very Hollywood is the latest perfume for women from Michael Kors. It's meant to evoke the idea of Hollywood glamour: the bottle (see detail below) recalls the flashbulbs on old-style cameras, and the ad spot features "stars" surrounded by paparazzi on the red carpet. Kors called it the "most glamorous, indulgent scent we’ve ever done".1

Remember Michael by Michael Kors? It came out in 2000, very nearly eons ago in perfume-land, and for awhile it seemed like women everywhere were wearing it. I still smell it on the street occasionally, and I think it's pretty, although as I said when I reviewed it, I prefer to smell it from afar and not on my own person. Anyway, they've updated it several times: there was Michael Sheer, and then Very Michael Kors, and then Michael Kors Very Pretty. I bring this up only because after smelling Very Hollywood, I'm tempted to think the brief called for "a version of Michael that young girls would wear in 2009", since Michael is, after all, not really the sort of perfume young girls go for these days.

Very Hollywood was developed by perfumers Laurent Le Guernec (who created the original Michael) and Pascal Gaurin, and it's considerably more au courant. The opening is bright, fruity, sparkly and pink: if I were writing the ad copy, I'd call it "watery pink champagne accord garnished with berries" (the notes: mandarin, iced bergamot, wet jasmine, ylang-ylang, raspberry, gardenia, orris, creamy amber, soft white moss and vetiver). After that it's watery florals. There's some strong gardenia for a time, but the heart is mostly pale and nondescript, as is the current fashion: it's nothing like the romantic, heavily floral Michael at all. 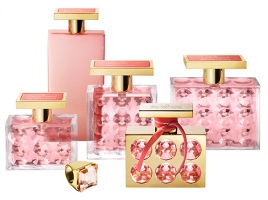 I like the far dry down. It's relatively earthy and relatively dry. You will pick up flashes of things vaguely like the listed notes— iris, vetiver, moss. If it were just a bit less pale and a bit less pink, it might qualify as sexy or interesting, but it is pale, and it is pink, and in the end it's still too clean to qualify as sexy.

Say what you will about Michael — Tania Sanchez called it "evil tuberose" and "a hair-singeing horror" in Perfumes: The Guide — but it was a distinctive, memorable scent. Very Hollywood is less so. Kors himself likens Michael to a "the little black dress" and Very Hollywood to "the gold dress",2 but to my nose, Very Hollywood is the more casual, easy-to-wear (and younger) of the two, and it's far less memorable — I predict I will not recognize it if I smell it three weeks from now: there are just too many fruity pinkish vaguely floral scents with pale-ish musky bases out there already. Very Hollywood is well done, and arguably more sophisticated than some other such efforts, but that doesn't seem quite enough. I was interested to read that prestige fragrance launches for women are down some 30% this year — gosh, it sure doesn't seem like it, does it? Maybe the explosion in niche is making up for the loss? Anyway, if it's true, then all I can say is that a 30% drop is not enough: there's still too much new product, and too much of it smells like it's trying to appeal to the same customer.