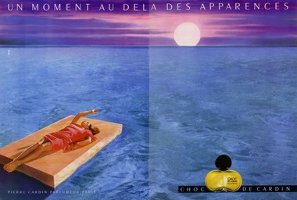 As an antidote to hot weather, a chilled bottle of something refreshing to splash on is a must. Open my refrigerator, and among the salted anchovies, ancient miso, and quart of half and half you’ll find a plastic jug of Revlon Jean Naté. If I could swing it, you’d see a clutch of Pierre Cardin Choc de Cardin bottles instead.

Choc de Cardin, developed by perfumer Françoise Caron, launched in 1981.1 It’s that rare fragrance that’s a mix of refreshingly clean and scintillatingly dirty. To get an idea of what I mean, imagine the scent of a hot sidewalk after a rain. No, Choc de Cardin doesn’t smell like wet cement, but it blends the sensation of dirt and crisp clean. Or think of what it’s like to emerge from the shower, all soapy fresh, then slip on your honey’s bathrobe — the robe that should have gone in last week’s wash but didn’t. That’s what I mean.

Choc de Cardin opens with sharp, soapy green. Initially it smells like many bergamot and herb-tinged colognes, cool and refreshing and not overly citrus. Before long, skank kicks in in the form of coriander and civet. Clean, light florals that smell to me of lily of the valley and maybe ylang ylang soften the earthy, woody skank, but you’d never know they were there unless you smelled for them. Sandalwood and oakmoss cushion the otherwise austere fragrance, transforming it into an herbal-floral chypre.

Choc de Cardin is an oddball. Most fragrances touched with skank seem to be warm and thick. Think of Rochas Femme, Amouage Jubilation 25, and Jean Desprez Bal à Versailles, for example. By contrast, Choc de Cardin is dry and sheer — cold, almost. But dirty. And clean. It’s such a pleasure to sample a fragrance that doesn’t cleave to trend or convention.

On my skin, Choc de Cardin Eau de Parfum only lasts about four hours, and at that point it takes nose-to-wrist contact to appreciate it. (Yet another reason it would be the perfect summer chiller fragrance.) Choc de Cardin is marketed as a woman’s fragrance, but it's firmly unisex.

Unfortunately, Choc de Cardin has been discontinued, although bottles of Eau de Parfum and (rarer) Eau Tonique are still available here and there online. It looks like for scorching days I’ll be sticking with my refrigerated Jean Naté supplemented with Rochas Eau de Rochas. Unless, of course, you can recommend any other sheer, fresh-skanky fragrances for summer.

1. In reviews on the internet I’ve seen references to Luca Turin saying Choc de Cardin is one of Caron’s lost masterpieces, but I’ll be darned if I can find the original quote.