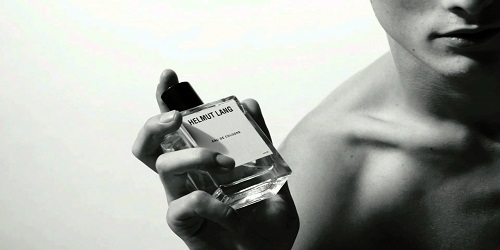 Helmut Lang's perfumes (originally issued in the early 2000s) are often described as "cult" fragrances. I never tried the perfumes when they made their debuts so my reviews will tackle today's re-release formulas.

Cuiron is a sheer leather fragrance, a combination of muskiness and salty/aquatic leather — imitation ambergris? Though Cuiron feels light, it has good tenacity and casts a wide net upon initial application. What Cuiron delivers at first spritz is basically what you get till the fade-out: 'watery' leather, musk, light amber. At the end of its development there's a hint of amber powder mixing with a skunk-y musk. To say this is one of my least-liked leather perfumes is an understatement; I felt uncomfortable wearing it and wanted to wash it off (but didn't...I wore it two days in a row for this review).

When I read Helmut Lang Eau de Cologne's list of notes I braced myself for a BIG "Whoa!"...unfortunately all I uttered when I sprayed it on was a wan "Whaaaa?" Ignore the energetic-sounding (supposed) notes and prepare yourself for an exhausted lie-down, not a wild ride. Eau de Cologne starts with an aroma I'll describe as "candy meets medicine" (it brought to mind a natural remedy...maybe for a sore throat). Eau de Cologne is sheer as can be and disappears on skin before an hour is up. I detect 'wasted' petitgrain, anemic artemisia and some bushed rosemary — a single rosemary leaf you pinch in the garden or kitchen packs more of a punch than a good dose of Eau de Cologne. As for the skin accord, I think I smell it in the base notes — this is the smell of skin bathed in pre-surgery antiseptic. 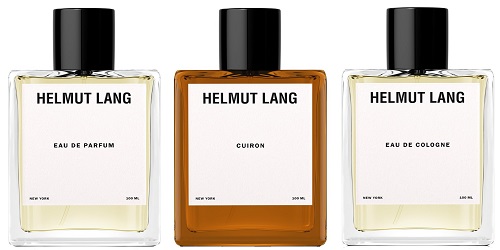 I'm happy to write that Eau de Parfum, same notes as Eau de Cologne, has recovered from its "cologne" malady and been restored to health; it's had a heart (note) transplant. Upon application, I smell buoyant orange leaf, rich artemisia and jasmine. Eau de Parfum has a barbershop vibe, but a neat barbershop vibe (think of a retro barbershop in Cuba). As Eau de Parfum develops, a cheery heliotrope note appears and is joined by a wood-y accord; the extreme dry-down presents sweet citrus-infused talc.

Eau de Parfum has four times the staying power of Eau de Cologne (it lasts about 4 hours when liberally applied); sillage is close to the body.

VERDICT (as Robin here at NST(TM) often says): I only like one of the three Helmut Lang re-issues, and even the one I like does not tempt me to purchase. If anyone out there wore the original Helmut Lang scents when they were first released and has tried the new versions, please comment.