After sniffing my way through a tea shop, a rose emporium, a spice shop and a few glasses of wine, naturally I thought it was time to smell some cheese. I know, I know — I can hear you giggling. But let’s get the jokes about sweaty socks and “cutting the cheese” out of the way right up front, because when it comes to aroma, cheese has much more to offer than stink.

In fact, when it comes to aroma, cheese is so complex that when Antonelli trains his staff to use their noses, the first thing he tells them is to go home and “start smelling everything as often as they can.” What they need, he says, is to fill their heads with a reference library of aromas from the world around them. 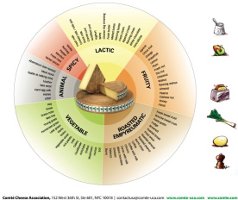 Antonelli described a washed rind cheese — pungent cheeses such as Epoisses and Taleggio  — that filled the shop with a smoky fragrance the first time they ordered it. They wrote up a description featuring smoke as a flavor. But for the next five months the same cheese was smokeless — until the most recent batch.

Those kind of shifts in flavor and scent reflect the artisan cheese equivalent of what winemakers call terroir, aromas and flavors that reflect the place where the cheese was produced.

“You have to start with the animal and what they bring to the table, and what their environment is like and what their feed brings to the table,” says Antonelli. “If they ate a lot of onions, you’re going to smell onions. If they got into a garlic patch, you’ll smell garlic. I went to visit a cheese maker a few weeks ago, and I picked up some grass and ate it, just to see what the animals were consuming.”

Really? How did it taste?

“Delicious,” he said, with tremendous relish. “It was crisp and it was green. The scent was sweet on the exterior, and then when I chewed it, it had a little more vegetal earthiness. There are a lot of herbs growing in the area.”

“That's extreme,” Antonelli admitted, “but if you start with that you can build your vocabulary of smell from the raw milk. With goat’s milk, you can pick out an acid, a bright aroma, even before you even taste it, and if it’s warm right out of the udder it smells sweet and musky at the same time, which is magnificent. And then sheep's milk smells rich, and grounding. Cow's milk changes constantly — it can go from super-bright, zippy and refreshing all the way to creamy sweetness.”

As we sniffed and tasted our way through a dozen or so cheeses it was easy to see why aroma was so important to Antonelli. Once I started paying attention, it was clear that what I could taste as the fats and proteins of the cheese broke down in my mouth was only half of the experience. The first cheese we tasted, a creamy goats’ milk, had an obvious citrus aroma, and the clean tang of sourdough starter. As it melted on my tongue, vanilla resonated in the back of my throat. The goat gouda that followed smelled of a fresh baguette and tasted of salt and, yes, of grass. A tiny spoonful of washed rind cheese gave off aromas of red wine, dark chocolate and hazelnut that exploded into funky richness of earth and hay in my mouth. But another washed rind cheese smelled of salami and barnyard, then resolved into a fine floral leather when I tasted it.

But for both cheesemongers and cheesemakers, aroma is more than an indicator of taste, it’s a measure of cheese as a living, changing thing. Both rely on their noses to tell them if something has gone wrong with their cheese — aromas of sour milk and ammonia are primary indicators. And when I asked Antonelli to name the scent that made him understand how important aroma was for understanding cheese, what he described was the smell of cheesemaking itself.

“It was a combination of smells. First, that lactic acid smell that comes off the milk when the acid's being broken down. It's probably repulsive to some people, but I think it’s magnificent. There's a sourness to it, and at the same time that there's a grounding musk, like an animal is in there. So you're balancing this really sweet milk with those smells in the heat — cheesemaker's rooms are always really hot.

And then you go from there to the cheese caves. When I was in France, each different kind of cheese had it's own little room. So the washed rind cheeses, they were in their own little box, and there were these strong barnyard smells, and the smell of must. And then you would go into the room where the Comté and the Alpine cheeses were — these giant rounds of cheese with ambient molds on them. And in that room you could smell soil, earth, worms — things that remind you of what’s underneath the grass. And then in the goat's milk cheese room there was this powerful biting smell. The mold type is usually a kind that goes airborne much more easily and you get this kind of biting attack on your nose which is magnificent.

And then, when you're enjoying cheeses and you're tasting — even if they're made in the same batch, they can be night and day from one wheel to the next. That is what’s really so exciting. Seeing that change.”