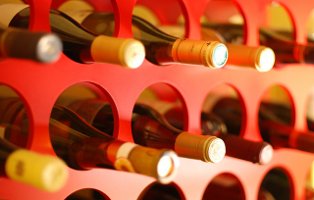 By the time the lovely Wine Scamp and I met for dinner at a local wine bar, I’d been pondering the overlap between perfume and wine for some time. When I talk to the uninitiated about my perfume world, wine nearly always comes up. It’s that other slightly mystifying luxury having to do with France and bottles whose crazy aficionados are always going on about “notes.” Wine reviews are also one of the few places one can read an analysis of smells in the mainstream press. And unlike food writers, who discuss the smells of ingredients (rosemary, star anise) or techniques (caramelized onions) wine writers refer to things that can’t possibly be in the glass: leather, hay, violets, smoke. Smells that sound more like something you’d find in a perfume (and I’d like that one, thank you).

“You should be a natural,” the Scamp had said, when I told her I wanted to learn more about wine. An attentive nose, it turns out, is essential to enjoying wine, not only because its complex bouquet is part of its beauty but because its flavor is so entwined with its scent. We smell wine when we sniff it in the glass, and then we smell it again when we swallow it and the volatile fragrant molecules rush up from the alcohol warmed on our palate into our retro-nasal passages. A wine that has a long lovely “finish” — a flavor that goes on and on in the mouth after you’ve swallowed — seems to offer a gastronomical version of a perfume’s dry down.1

Reading about this I wondered, not for the first time, why perfume and wine people don’t hang out more often. Couldn’t wine lovers benefit from a tour through my perfume collection, or at least a round with my raw materials?

I’m not the only one to have had this thought. When the Scamp arrived she was carrying what looked like an enormous atlas labeled Le Nez du Vin. “I thought it might be fun for you to look at my smell kit,” she said. Once we were seated, she slid the book out of its case. “Sorry,” she apologized, as a wave of something like sweetened galbanum swept over us, “someone broke my green pepper and it leaks.”

The “book” was a case containing 54 small bottles, each a fragrant note commonly found in wine. There was also a menu dividing the notes into categories (“leafy,” “woody,” “toasty,” and so on) and a set of watercolor illustrated flashcards. The latter explained the molecular compound that corresponded to each note, and the kinds of wines most likely to display it. The cards were lively, clear and, like the whole endeavor, very French — the card for butter shows a European style brick and the accompanying text begins, “Four French butters enjoy ‘apellation d’origine contrôlée’ status.”

Later, the Scamp showed me an additional set, “Les Défauts,” that contains the twelve notes most commonly found in wine that is “off,” including rotten apple, vinegar, glue, soap, and horse. (“Now it so happens that Bacchus’ patronage does not always suffice to protect wine from the whims of nature and human error,” begins the accompanying pamphlet written by Le Nez du Vin founder Jean Lenoir.)

In both sets the idea is the same: smell is not the obscure realm of people with special noses, it is a language that can be learned like any other, through repeated exposure and memorization. The Scamp and I sniffed through some of the 54 notes together. We agreed the peach was good, but had trouble with the apricot and lychee. Some notes smelled remarkably “true” to us, others like fake candy versions of themselves, and a few were unrecognizable — “toast” smelled like caramel popcorn. (Maybe it’s French toast?)

When I contacted Le Nez du Vin, they told me that the notes had been created by analyzing and isolating the aromachemicals found in wine. They weren’t intended to be copies of the scents in life, but of the scents in wine. I remember Robin once saying of L’Artisan’s Fleur de Carotte that she had to adjust her nose to “what a carrot translated into perfumery smells like.” These were scents translated into wine.

But of course, neither a perfume nor a glass of wine is merely a collection of separate notes. It matters how those notes come together, when you smell them, and with whom. The Scamp and I ordered four glasses of wine — two white, two red. On another night they might have been merely good, but because we sat across the table from each other outside on a spring evening sniffing and describing what we smelled, and sipping and describing what we tasted, and then eating and sipping and talking some more, they were gorgeous. Was that tobacco or new leather in the red?  Was I crazy, or did the apricot in the white just turn into melon?

“This so great,” sighed the Scamp. “I hardly ever get to geek out like this.”

As the wine warmed and changed in the mild night air, it was more clear than ever to me that both perfume and wine were simply fragrance suspended in alcohol, one reacting to the warmth of my skin, the other to the warmth of the air and my palate, both intoxicating in their own ways. We sipped very slowly with all that talking and when we were ready to leave there was still a fair amount of wine left in the glasses.

“Don’t you feel guilty?” I asked the Scamp. I always feel guilty when I don’t finish my wine. It’s part of why I don’t know more about them. I’m such a lightweight I never get past the second glass.

“Not at all,” she replied. “We drank what we wanted, and we appreciated everything that we drank.”

I took one more swallow of the apricot-melon white. It was almost too warm to drink, and the melon was fully present, honeyed and overripe, in the glass and on my tongue.

And that was enough.

1. At least I'm pretty sure that's how it works.  Please do correct me in the comments if I've gotten the wrong idea here.

Note: image is wine [cropped] by Joe Shlabotnik at flickr; some rights reserved.