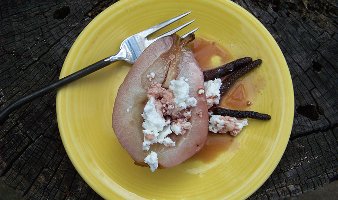 A new spice shop opened here recently and I went down to see if there was anything delicious and fragrant I could bring to you people. I found several things I’d been looking for — sichuan peppers, nigella seeds, aleppo pepper — all of which we’ll discuss at a later date, and one I didn’t even know existed that I am very excited to tell you about right now.

Long pepper is only one of its names. It also goes by Balinese pepper, Bengal pepper, Jaborandi pepper, Indian long pepper, and various combinations thereof, none of which appear in the indices of any of my many cookbooks and ingredient guides. The internets seem to agree that it is widely employed in Asia for stir fries and pickling, and is featured in North African spice blends such as Ras el Hanout and Berbere.1 The same sources repeat the story that it was the pepper preferred by the Romans, and some add that it was the spice the world thought of as “pepper,” until cultivation methods made the black pepper we are accustomed to today far more widely available. I have a feeling limited availability might explain long pepper’s absence from my cookbooks. (If you are familiar with it, or come from a part of the world where it is commonly employed, do comment.)

At any rate, there it was, on the wall of glass jars devoted to peppercorns. Its exotic catkin-like shape drew my eye — wait, what on earth is that? But it was the sensuous cloud of fragrance that emerged from the jar when the sales assistant began measuring out my order that made me double it on the spot.

I have seen long pepper’s flavor described variously as flowery, earthy, or “possessing a cardamom-like sweet undertone,” but no one describes its amazing smell, which is a combination of all of these — earth, flowers, cardamom — wrapped in a thick veil of musky, waxy, fattiness with just enough goat to keep things interesting. In fact, the scent of whole long pepper resembles nothing so much as a slightly spicy version of labdanum, the aromatic resin traditionally used to give amber perfume its animalic depth or lend a sweet, smooth leather note.

I could smell my long pepper in the car, straight through the plastic of the small, half ounce bag I bought. I could smell it on my hands after I put the bag away in the pantry. And I could smell it every time I opened the pantry door over the next week, while I figured out how to get that insistent gorgeousness into my mouth.

Most of the cooking advice I found suggested breaking, grinding or crushing the pepper. I did so, and made a delicious steak poivre, but the rich notes so present in the fragrance, while an excellent match for the meat, were disappointingly vague, nearly obliterated by prickly heat.

Clearly, large amounts of the aromatics I was after were on the surface of the pepper. I decided a gentle simmering of the unbroken peppers was in order, perhaps with some sweetness in the liquid to balance out the heat and help the other notes to the fore. That thick scent called out for the matching thickness of honey. Some earthy red wine wouldn’t be amiss either, I thought. So I tried this:

2 large firm pears, peeled, but left whole. I used Anjou pears, but as long as they aren’t soft any pear will do. You may core them from the bottom if you wish.

Mix the honey, wine and water together. Bring very briefly to a boil, then reduce to a gentle simmer. Add pears and pepper. Let simmer gently, uncovered, on the lowest setting for 20-30 minutes or until pears are tender but not falling apart — poke with a fork to test. You will want to roll the pears over every ten minutes or so to make sure they absorb the liquid equally on all sides. Or you could do as the excellent David Lebovitz suggests and cut a parchment paper circle to drape on top of the pears. Do not, however, start a small fire by cutting your parchment over the open gas flame beneath the already simmering pears. Ahem.2 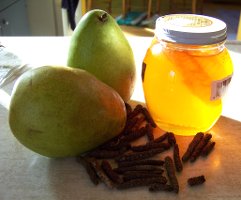 Once the pears are simmering retire to the couch, read that book you’ve been meaning to start, and wait for the moment — it won’t be long — when the wine and honey come together to turn that barnyard touch in the peppers to velvet. Or you might, as I did, throw away that stinky thing you’ve been ignoring in the fridge — in my case a pot of beans gone fuzzy with mold — and then, when you walk back in the house after taking out the toxic garbage, notice with wonder and gratitude how that velvet scent has filled the entire house.

When the pears are done, remove and store upright in the fridge. Remove all but two or three of the peppers and reserve. Turn up the heat and let the remaining syrup boil down until it reduces by about half or is thick enough to coat a spoon. When reduced, the syrup will be a splendid dark ruby color and taste exactly like the thing you have been smelling for the past half an hour, but more so, with a bare hint of heat and a lingering resonance that goes on and on at the back of your throat. It will happily reside in your fridge where that stinky thing used to be for several weeks if you do not devour it before then on yogurt, crepes, ice cream, strawberries, spoons…

Before serving allow pears and syrup to come to room temp. Halve pears, top hollows with goat cheese, drizzle with a generous amount of syrup, and garnish with peppers.

The sweet muskiness of the syrup is both tempered and echoed by the creamy goat cheese and the flavor of the pear. Together they become one of those things that tastes far more delicious and sophisticated than it has a right to given how simple it is to put together. Frankly, I was torn between greedily devouring all of the results and showing them off to as many people as possible. It’s that good.

Long peppers can be ordered here and here.

Note: The amounts I list here are fungible and slightly eccentric. I started with only two pears because I didn’t want to make a lot of an experimental dish. I used less wine than most poaching recipes call for because a cup was all I had, and I upped the amount of honey because I wanted a sweeter poaching syrup to kill the heat of the pepper. Please experiment as you see fit. Also, I used a fairly neutral orange blossom honey and Spanish table wine, but it might be interesting to try a stronger, darker honey or an earthier wine.

2. Post-fire, my parchment circle didn‘t seem to help much so I discarded it.

Another note: all images taken by the author.