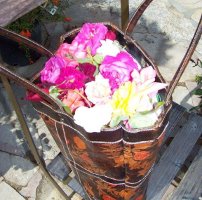 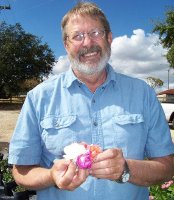 Twenty-seven roses. That’s how many blooms tumbled out of my purse when I got home, each a different variety, all richly fragrant. My car smelled of roses. My office smelled of roses. I’d just gotten back from Independence, Texas, home of the Antique Rose Emporium.

A busy fall delayed my visit to the eight acres of display gardens — the roses peak in April and October — but it’s been a warm November and when I arrived the beds were still alive with migrating butterflies and fat bees storing up the last of the season’s pollen. Mike Shoup, the Emporium’s cheerful, bearded owner (shown above right), toured me around the different gardens, including one expressly for the many weddings the Emporium hosts. The goal, he explained, was to show people how they could integrate old roses (a loose term for varieties at least fifty years old, sometimes much older) into their gardens. It was all very pretty. But I wasn’t there for gardening inspiration. I was there to smell the roses.

I explained my purpose — and Now Smell This — to Mike as best I could. “Oh that’s great!” he said. “I think fragrance is one of the most important things about the roses, but it’s so hard to talk about.” Then he recommended The Emperor of Scent, Chandler Burr’s book on biophysicist and perfume critic Luca Turin, and I knew I'd found a fellow scent fanatic.

We got in Mike’s truck and headed over to the 21 acres of fields and greenhouses where the Emporium’s roses are grown, talking as we drove. Mike has been collecting and growing old roses since 1982. In 1984 he joined the loosely affiliated group of rose-obsessives who became known as the Texas Rose Rustlers. Together they scoured highways, old cemeteries, churchyards, and isolated towns and farmsteads for “lost” varieties of old roses no longer available through the nurseries, taking clippings to propagate whenever they found them.

I’ve always imagined the Rustlers as a tough, lawless bunch of Texans — mostly of the older, no-nonsense female variety — roaming the countryside with shears in hand, stopping at nothing to get their roses. Mike admitted there was some truth to my fantasy, especially in the beginning. “But there’s an etiquette now,” he assured me.

The Rustlers often found their roses flourishing with little or no care, in spite of  Texas heat, droughts, and floods. Mike converted his original plant nursery to the Emporium so he could grow and share these tough beauties. His stock is still made up almost completely of reclaimed varieties, many of which arrived courtesy of people who heard about what he was doing and wanted to share roses they’d found, or preserve those they had been growing themselves. The Emporium now functions as a kind of ad hoc Osmothèque of the Southern rose world. Many grateful customers have been reunited with roses they remember seeing and smelling as children.

Especially smelling. Modern garden roses were bred for bigger, showier blooms. Like roses grown for the cut flower market, many lost the strength and variety of their fragrance along the way. Though the blooms of old roses are often smaller and simpler, they are often powerfully fragrant. 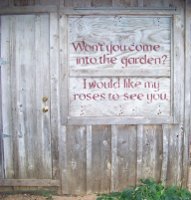 When we arrived at the fields, Mike led me through the roses, plucking roses and handing them to me as he went. “Here smell this one,” he said, again and again, as we tramped along. I complied happily, breathing deeply, then tucking the bloom in my bag when Mike handed me the next one.

I was astounded by the depth and variety of their scents. Some, like the bright red Maggie, mixed classic rose with distinctly peppery, herbal notes — the perfect rose for the groom’s lapel. The bright yellow Julia Child had a gorgeous, rounded fruitiness to it, just touched by soft musk. (I could easily imagine Julia herself trilling in pleasure at the scent.) In the charming Celine Forestier, a climber whose soft yellow blooms blush pale pink at the center, the same soft musk leaned toward honey with a sprinkling of cinnamon. And the small white bloom of Independence Musk was so richly musky that I nearly blushed the first time I sniffed it. The second and third time I swooned.

The classic dark red Chrysler Imperial (originally bred to sell the car) smelled distinctly of lemons. “I think it smells like Lemon Pledge,” said Mike, and it did have some of that woody waxiness to it. In Jean Theresa, a glowing yellow-apricot rose that Mike bred himself and named for his wife, the same citrus note was sweetened by myrrh and made complex by a very soft, fruity leather note. The final result was intoxicating and we paused for some time before I was ready to leave Jean Theresa behind. Sadly, she is not for sale.

“Black spot,” said Mike. “It’s susceptible to black spot. So I can’t sell it. But everyone who smells it wants to take one home.”

We continued on, bloom after bloom, happily comparing notes on what we smelled.  (Me: “Wow! This one has a celery note!”  Mike: “Yes, exactly! That’s exactly it!”)  Mike made a call to his next appointment to say he would be late.

By the time we got to Gruss an Aachen my purse was full of flowers, and I was giddy, nearly drunk on scent, so I can’t say for certain that what I smelled was actually there, but I swear that this small, creamy rose, which the Antique Rose Emporium website describes as having only a “light fragrance,” smelled of aldehydes. Smelled, in fact, almost exactly like the opening of a rose-laden vintage perfume.

I tested my idea out on Mike. “Does this smell like an old-fashioned, expensively dressed woman ready for a night out to you? That strong, just-applied perfume smell?”  “Yes,” he confirmed, noting that it wasn’t one of his favorites.

On the way back to the display gardens, Mike handed me one final rose.  It was deep maroon, very simple and had a wonderful, dark rose scent that was somehow familiar. Mike drove and I sniffed, trying to place it. Maybe one of my perfumes? As the truck came to a stop it came to me: it was the scent of the thorny wild roses I used to walk by on my way to elementary school. I’d found my own lost rose, one I’d never even known was missing.

The Antique Rose Emporium ships to all U.S. locations suitable for their roses. They are happy to offer advice, make recommendations, and find lost roses over the phone. Also, a PSA: Meyer Lemons are back in season!