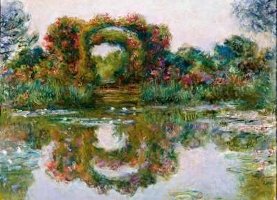 Eau Eternelle, the first release from the new independent fragrance house S Poncet, is described as a perfume of "never ending exhilaration." The S Poncet website lists its notes as lemon, mandarin, grapefruit, petitgrain, lavender, rosemary, patchouli, sandalwood, and moss; additional notes (via Beautyhabit) include jasmine, carnation, lotus, clove, patchouli, and guaiac wood. Its sources of inspiration, according to founder Sabine Poncet, are a child-like painting of swimming fish and memories of Monet's garden at Giverny.

Eau Eternelle opens on a cluster of citrus-floral top notes with a fizzy, aldehydic kick. Its initial phase also seems to include an ozonic-aquatic note with a hint of melon; it's not my favorite thing to encounter in any fragrance, but it fades away before long. In the heart of the fragrance, jasmine and lily are most prominent, and I'm wondering whether some rose might be hovering there as well. Eau Eternelle has a slightly mossy base under the extended floral notes. It's a "perfume-y" perfume, quite feminine, and not as fresh or watery as the description (or the opening notes) would suggest. It has a somewhat old-fashioned sensibility, which is a good thing in my book. It reminds me vaguely of some French white-floral perfume of the 1970s, perhaps something that Coty or Caron would have released during those years. It works as a casual-chic daytime fragrance, but it could easily make the transition into evening. 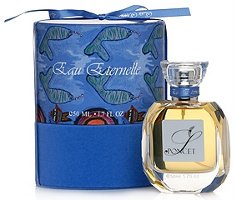 The packaging and overall design of this new line are nicely done. Eau Eternelle's clear-glass bottle is substantial and well crafted, with faceted corners and a narrow strip of blue ribbon around its neck, and S Poncet also offers a limited edition silk scarf, an enameled bracelet, and earrings, all sharing the design or colors of the Eau Eternelle packaging. (The second S Poncet fragrance will be released in late fall; it is reportedly inspired by an oak forest in the Loire Valley of France, with notes of wet earth, mushrooms, and decaying leaves, and it will have its own color scheme and matching accessories.)

Lastly, a close look reveals that S Poncet's logo is the mayfly, an insect belonging to the order Ephemeroptera. Ephemeros, the Greek word for "short-lived," is also the official name of Poncet's company. It's a thoughtful and lovely metaphor for fragrance or any fleeting pleasure.