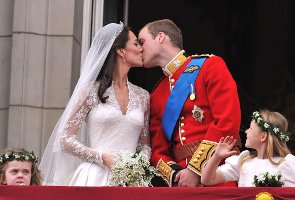 Almost as soon as word got out that Catherine Middleton1 wore Illuminum White Gardenia Petals during her wedding to Prince William, the fragrance flew off the shelves. Illuminum vendors Luckyscent (in the United States) and Roullier White (in Great Britain) have month-plus waiting lists for the fragrance. Illuminum is hard to find, leading me to wager that many of the White Gardenia Petals purchases are unsniffed.

I was definitely curious what White Gardenia Petals smelled like. With what would a prospective queen, dressed in Alexander McQueen, watched by heads of state from around the world, serenaded by choirs and trumpets, surrounded by a massive stone abbey impregnated with centuries of incense — with what would she perfume herself? Thanks to a decant from the industrious [Now Smell This reader] Daisy, I can now tell you. With something that smells like a scented panty liner, that’s what.

I wouldn’t write this if I thought the Duchess of Cambridge were a regular Now Smell This reader. I hope every time she wears White Gardenia Petals she feels the love and exhilaration she felt on her wedding day. But I’m guessing some White Gardenia Petals purchasers might wish they spent their perfume money on another fragrance, say Ormonde Jayne Frangipani Absolute, my choice for Kate.

Illuminum is the second line of fragrances from Michael Boadi, former hairstylist to the stars and “Brand Creator” for Boadicea the Victorious. Illuminum has four categories of fragrances: floral, citrus, musk, and oud. Within each category are four fragrances. Illuminum’s website lists White Gardenia Petals’s notes as lily, white gardenia, muguet, jasmine breeze, and amber woods.

White Gardenia Petals doesn’t smell much like gardenia, and it doesn’t pack the white floral punch you might expect from a fragrance with its name. Instead, to me it’s a thin, slightly ozonic-musky lily of the valley with a tingle of fruity, snuffed-candle aldehydes and the tiniest hint of powder. I don't get any amber or woods. It has average lasting power and quiet sillage. Yes, White Gardenia Petals is pretty, but I don’t find it special. I've smelled it a hundred times as I've unwrapped a new package of toilet paper.

I see Kate’s challenge. She needed to present an image that was British, modest, modern, and correct. Today is no time for splashy nuptials, and the royal family has had enough fires to put out in recent years without having to worry about her. Kate’s wedding dress fit the bill perfectly. It was classic and quiet, but still modern — the elegance and glamour of Grace Kelly combined with Sarah Burton’s use of McQueen’s beautiful tailoring at the hips, reminiscent of both Tudor gowns and avant garde fashion. But the fragrance? Maybe Kate had to go British and couldn't wear a party-girl fruity floral, but what about Penhaligon’s and Ormonde Jayne?

The Daily Mail reported that the Duchess requested Jo Malone candles, handwashes, and lotions in Orange Blossom; Grapefruit; and Lime, Basil, & Mandarin for the bathrooms at Westminster Abbey. If you hanker after the fragrance of Kate’s wedding, you could console yourself with a Jo Malone Orange Blossom candle. Maybe by the time the candle has burned through, you’ll have had the chance to smell White Gardenia Petals before making an unsniffed purchase. Better safe than sorry.

Note: top image is The Wedding of Prince William and Catherine Middleton: The newly married couple kiss on the balcony via The Prince of Wales.