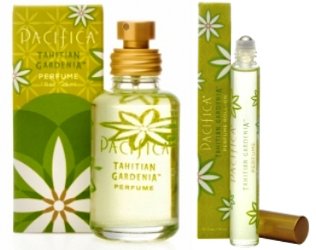 While shopping for an air mattress so I could sleep in the cool basement — it’s been a scorcher of a week so far — I wheeled my cart past the organic foods section and saw a rack of Pacifica roll-on perfumes on sale, including Tahitian Gardenia. In summer, I sometimes crave gardenia. At the same time, although I love big white flowers on other people, gardenia wears like a costume on me. It’s as if I’m wearing a fabulous hat that I love for about an hour — after which I wrench the blasted thing off my head so I can feel like myself again.

After calculating that I could buy twenty Tahitian Gardenia roll-ons for the price of one bottle of Annick Goutal Passion, I tossed one in my cart. Tahitian Gardenia went on the market in 2007, and the Pacifica website lists its notes as including jasmine, sweet orange, and tea leaves.

At home, I rolled Tahitian Gardenia on my forearm and put it through the summer gardenia quiz:

Is it too big? No. Tahitian Gardenia is definitely present, but it minds its manners. Next to Frédéric Malle Carnal Flower (the most gorgeous hat of all), it practically vanishes. Without Carnal Flower’s pulchritude as contrast, it’s a light white floral, more jasmine than gardenia to my nose. Tahitian Gardenia fades after a few hours, too, which to me is perfect for the summer. Besides, with a 10 ml roll-on selling for less than $10, I can reapply as often as I want.

Is it too fruity or sweet? In the summer, the last thing I want is a gardenia that drips with peach, like Jungle Gardenia, or one that smells like a gardenia daiquiri. Tahitian Gardenia’s orange is dry and citrusy and barely present. (It was only by smelling it next to Carnal Flower that I picked it out.) Tahitian Gardenia’s dry down hints at vanilla, but it’s no cookie. The perfume passes this test.

Is it too clean? A lot of popular white florals these days are loaded with laundry musk or orange blossom — or both. They smell like shampoo, or, worse, laundry detergent. Tahitian Gardenia is not indolic, but it’s not “perfume clean,” either. You’d never mistake it for Kai.

Is it too dowdy? Gardenia can make its wearer smell like the Queen Mother. I want a light, summery gardenia that says “sundress” and not “powder blue matching ensemble with practical pumps.” Tahitian Gardenia isn’t serious enough to be dowdy.

In fact, if you’re a gardenia lover, and gardenia fragrances suit you, you might not want to go down the Tahitian Gardenia path at all. But, if you adore gardenia but can’t fully commit to it, Tahitian Gardenia might be the answer. At its price, it can’t hurt to try.

Pacifica Tahitian Gardenia comes in a wide range of body products and home fragrances. My 10 ml Perfume roll-on was about $9.50 on sale (at full price it’s $12). It's also sold in 29 ml Spray Perfume ($22) and 10 g Solid Perfume ($9). For buying information, see the listing for Pacifica under Perfume Houses.