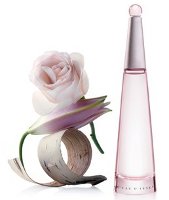 I remember when Issey Miyake L'Eau d'Issey was released in 1993; looking back, I can understand how it was a breath of fresh air (and clean water and a few lotus petals) after the Poison-heavy years of the late 1980s. It didn't suit my own tastes — I was busy trying Jean Paul Gaultier's new fragrance, now known as Classique, at the other end of the fragrance counter — but I respected Issey Miyake for carving out a new trend in fragrance.

On a recent afternoon of perfume-sampling in midtown Manhattan, I stopped to try the  recently launched Issey Miyake L'Eau d'Issey Florale at Sephora. L’Eau d’Issey Florale was developed by perfumer Alberto Morillas; its notes include rose, lily, mandarin, and white woods. The iconic, minimalist L'Eau d'Issey bottle is frosted pink for this version, and the L'Eau d'Issey Florale advertisement, which has caught my eye in a few magazines, features a lovely still-life photograph in the style of the late Irving Penn. All well and good. But by the time I was riding the bus home, I was writing an e-mail to Robin, telling her that I wanted to review L'Eau d'Issey Florale because it made me feel "simultaneously angry and bored."

Sprayed on a paper blotter, L'Eau d'Issey Florale smells like a bright citrus-rose-peony blend, not very distinctive but not at all offensive, either. However, worn on the skin, it is sheerer and sharper. The core of the fragrance is a very synthetic rose-lily accord that lasts for hours. The ozonic note that made the original L'Eau d'Issey so memorable is there, too, but in this case, it only serves to strip the floral concept of all sensuality or romanticism. There's a faint hint of sweet, but still very light, vanilla-tinged wood in the composition's very late development, but L'Eau d'Issey Florale is mostly an all-surface fragrance, without depth or even any intriguing angles or curves. Maybe I'm just too old-fashioned, or maybe I'm missing the concept? Perhaps there is an audience for a bleached-clean floral fragrance, even if the segment of the perfume-shopping public that enjoys "clean" scents is also typically uninterested in traditional floral notes such as lily and rose.

I'd categorize L'Eau d'Issey Florale with other "pink" flankers, such as Dolce & Gabbana Rose The One and Jean Paul Gaultier Classique X. I wasn't crazy about either of those fragrances, but this one seems even less necessary, perhaps because the original L'Eau d'Issey was so perfectly simple and spare. If you're looking for a springtime rose fragrance with some white floral notes, I can recommend YOSH Sottile, especially in its newer Eau de Parfum concentration; if you just want a transparent true rose with a touch of citrus, Parfums Delrae Coup de Foudre seems like a much higher-quality product (with a price to match, alas).

When I arrived home after trying L'Eau d'Issey Florale the other day (and I brought a sample home with me, just to make sure that I hadn't misjudged the fragrance too rashly), I read Robin's freshly-posted article about the frustrating current state of affairs in fragrance: too many releases, too little innovation. I nodded my head, and inhaled the still-going-strong Florale on my arm, and nodded again. And what had I actually purchased for myself, during my scent-sniffing travels that day? A replacement bottle of my beloved Caron Farnesiana. There you go.