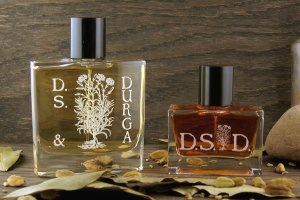 D.S. & Durga, the Brooklyn-based, independent-perfumer duo, has revamped its fragrance line for 2011. Some of the original scents have been tweaked a bit, and nine new scents were added; the entire line continues to "take inspiration from antiquated herbal wisdom, native ritual medicine, Americana, outdated lore, geography, history, and gastronomy." I've just tried the three new "feminines," each of which has its own distinct mood.

Poppy Rouge takes its name from a lyric in Mississippi John Hurt's "Richland Woman Blues," and it's a blend of orange flower, jonquil, and Parma violet. It's not as impulsive and racy as its source might suggest, but it would make a lovely spring fragrance. It's a fresh bouquet of orange blossom, the nicest one I've smelled since Atelier Cologne's Grand Neroli. As it evolves, an almost lily-like note (the jonquil?) emerges, but the violet is very, very subtle. Like many of scents from D.S. & Durga, Poppy Rouge smells as though it contains a high percentage of natural ingredients.

Five Step Waltz evokes the sensuality of a waltz and the shocking effect this dance must have had when it was introduced into genteel Victorian ballrooms: it's an intense harmony of vanilla, amber, lavender, jasmine grandiflorum, and Moroccan rose. Five Step Waltz starts with a burst of smoky-creamy jasmine. Just when it seems a bit too rich for everyday wear, the scent mellows into a jasmine-amber core, and then into a soft vanilla enhanced by a rubbery-sweet ylang-ylang note.

An old, dear friend of mine who sells vintage goods on Etsy recently told me that she has noticed an increasing market for garments, home furnishings, or any other rustic-chic item tagged as "heritage,"  "artisan," or "Americana." D. S. & Durga was at the forefront of this trend, and they're still executing it well. Their imagined world is a pleasure to enter, because it's finely detailed and modestly scaled — their fragrances have individual identities, neatly crafted compositions, and reasonable prices for an "indie" line. Now, please excuse me while I go sip a cup of tea and doll myself up in preparation for a night on the dance floor.

(To read about some of the company's masculine scents, see Kevin's reviews of Cowboy Grass, Marblehead Reds, Barbados, $, Vetyver & Juniper.)