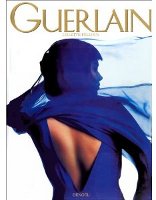 I am not a great fan of coffee-table perfume books, and this one reached me almost by chance. A late bloomer in many ways, I’ve just recently discovered Guerlain’s 1889 Jicky, and realized that for me “the history of Guerlain” signifies little more than how and where I’ve sniffed and chatted: at the Champs Élysées mother ship; at Saks Fifth Avenue in Boston; on the perfume sites. So, pulling my nose away from my precious Jicky sample, I endeavored to bury it in instead in a book on this historic house. In one distracted click, I ordered the least expensive of the lot: $22.00 used. Imagine my surprise when this 13.4 x 9.8 x 0.8-inch, hardcover book reached my doorstep in perfect condition.

Now, coffee-table books are not created to be read cover-to-cover, but for you, Fragrant Readers, that’s precisely what I’ve done. In the first chapter, on the founding of Guerlain in the 19th century, Colette Fellous links trends in perfumery to the cultural currents that flavored emerging modernist movements in literature, music, the visual and performing arts. The Jicky chapter presents this daring scent composition as an aesthetic bridge to the 20th century. Fellous argues convincingly that this strange, new blend, which does not imitate a natural bouquet, reflects the artist’s attempts to control nature, as expressed in works such as Joris-Karl Huysman’s 1884 Against Nature (À Rebours). Subsequent chapters (there are six in all), complete an unabashedly Guerlainophilic history of French perfumery, chock-full of tributes to the house classics.

After a promising start, I found the last few chapters a tad whimsical and outdated. Sweeping generalizations about perfume’s magical qualities, and prescriptive declarations on fragrance composition no longer apply — not even to Guerlain: “We should also remember that a good perfume must be balanced and respect classic rules of harmony” (7); “For a perfume to be beautiful, it must, above all, be original, not a reminder of an already-smelt odor” (126); “Here it is clear that perfume is endowed with unlimited power for anyone who knows how to use it […] The secret dream of any perfumer might well be to give a woman what will enable her to simultaneously offer and ask for everything. And he might well be working silently toward this unconfessed aim, in the manner of an alchemist, dosing and blending the rarest substances to achieve the fragrant gold of our dreams”(117). You get the idea.

As the back page acknowledgments attest, the Guerlain family kept close watch over the production of this volume. Indeed, most of the gorgeous, full-page photographs come from the Guerlain archives. It’s a pleasure to leaf through the glossy pictures, glancing at generous, informative captions, which do not repeat information from the text itself. On page 47 you’ll find a 1945 photograph of American G.I.s lined up in front of the Champs Élysées boutique — almost a mirror image of the Chanel photo that has garnered so much attention in recent months.

Since the book was obviously produced to celebrate Guerlain, you won’t find edgy revelations on these pages. Guerlain comes across as the engine that drove the art of perfumery from the early nineteenth century through the 1980s. While the author does not claim unfair “firsts” for Guerlain, she does describe the fragrances as “prototypes:” Mitsouko, the protoype for chypre; Shalimar, the prototype for oriental accord. Coty and Patou receive due credit, but most other houses escape mention. Oddly, the book closes with a gratuitous and awkwardly translated dig at Chanel on the penultimate page of text: “Thus when Marilyn Monroe confessed a few years later that she slept in only Chanel No. 5, she was only repeating a very banal advertisement from the end of the 1930’s in the United States” (154). Apparently Languer, who made Soir de Paris and Soir Rive Gauche, had advertised (in French publications, before 1930) a perfume designed to be worn between the body and silk. 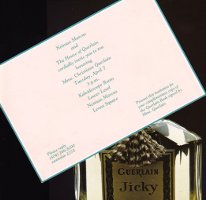 Although the narrative ends in the 1980s, this richly illustrated edition would make a lovely gift for the right person. I am attached to the experience of leafing through paper books. As if to reward my Luddite ways the pages of my own copy revealed unanticipated rewards in the form of one more connection to the Guerlain family. First I discovered, tucked inside, an invitation to a Guerlain perfume event held by Neiman Marcus on Lenox Square (Atlanta, GA; see above), promising this book as a free gift. Then I found Christiane Guerlain’s autograph (dated 1992; see below) on the title page. I have a feeling I'll be buying another Guerlain book to learn more about the family. Meanwhile, I have a date with Jicky. 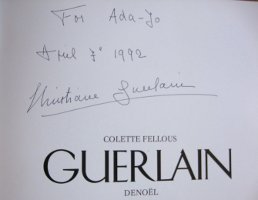