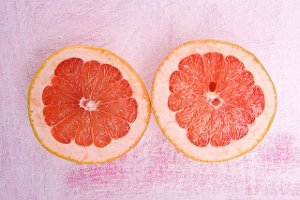 The brand ethos over at Jo Malone strikes me as decidedly mainstream and (very) British; they've made a virtue out of simplicity by emphasizing the layering — or fragrance combining, as they prefer to phrase it — possibilities of their relatively linear, usually clean and often sheer scents. Here and there, they've ventured out into the exotic (did anyone try the Cologne Intense collection? I've seen nary a word), but with the new unisex Tea collection, they're back on familiar ground both for them (what could be more British and straightforward than tea?) and for us (tea fragrances not being exactly thin on the ground).

Assam & Grapefruit is my early favorite of the five. I say early because it's the only one I've put on skin more than once, but short of a miracle, nothing is going to topple it from the top of the heap; Sweet Milk would make an agreeable layering agent if you didn't already have something like Demeter Condensed Milk, but the other three (Fresh Mint Leaf, Sweet Lemon, Earl Grey & Cucumber) failed to move me.

Assam & Grapefruit, on paper at least, is wonderful stuff, and it shows promise on skin too, if you apply generously and then go ahead and apply a little more for good measure. The opening is crisp and tart, with grapefruit and rhubarb. It softens rapidly, and gets slightly spicy (a little dash of cardamom) and builds into a nice black tea base (the assam, done here as a mildly malty but not at all smoky black tea note). I did not notice the rose and almond until I put at least 5 or 6 sprays on skin, but yes, they're there, and the almond adds a gently nutty aspect to the dry down, which also includes patchouli (squeaky-clean and pale) and musky woods (likewise).

My complaint about Assam & Grapefruit is one that is frequently aimed at Jo Malone fragrances: it's just a bit too soft and sheer and well-behaved. It isn't merely a matter of concentration; I wish they'd amped up the tea and spices, given it more sizzle and verve, so to speak. Admittedly, it might just be that this isn't the best time of year to try it — I'm guessing it will make a better showing in warm weather. I did try layering it with Sweet Milk to give it more body, but I found the combination vaguely unpleasant.

For citrus and tea, my personal favorite is my long-time staple, Hermès Osmanthe Yunnan, which is likewise more transparent than not but which just has more oomph. Still the Assam & Grapefruit is very much worth a try, and it easily beats out the Hermès in terms of price and availability.

Jo Malone Assam & Grapefruit was developed by perfumer Christine Nagel. It is a limited edition, and is available in 30 ml Cologne for $55.

Note: top image is Grapefruit by geishaboy500 at flickr; some rights reserved.