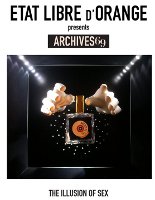 Next up from French niche line Etat Libre d'Orange: Archives 69, named for the brand's street address in Paris. The tag line: The Illusion of Sex.

I will update with sizes and concentration when I can. Archives 69 will be followed later in the year by Philippine Houseboy, due to launch in June. (via etatlibredorange)

If you missed it, Etienne de Swardt of Etat Libre d'Orange talked about Archives 69 in this video.

Another update: see a review of Etat Libre d'Orange Archives 69.