From Diptyque, concentrated versions of Philosykos or L’Ombre dans L’Eau in a limited edition hand-crafted 100 ml bottle from the Cristallerie Saint-Louis: "The union of specific expertise in filigree and a contemporary design, created by the young designer FX Balléry, has given birth to an elegantly simple bottle with an apothecary feel." Packaged in a black lacquered wood box with silver funnel and a 200 ml glass refill. Due to launch in October, 350 units produced, £795. (via press release) 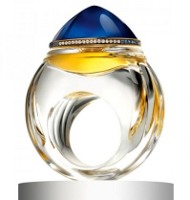 From Boucheron, Boucheron Femme in a limited edition bottle by Baccarat. The 18k gold ring around the cap is set with diamonds and sapphires. Created for Harrods, but it is not online there and I do not know the price. If you have to ask, you probably can't afford it, right? (via veraclasse.it)

From Lancôme, the Diamant Noir edition to celebrate Trésor's 20th anniversary. 20 numbered bottles featuring a hematite cap and a ring of black crystals around the neck, 2000€ each. (via conseillere-de-beaute.fr) 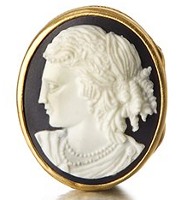 From Estee Lauder, a Jay Strongwater "Wise Ole Owl" solid compact in the Beautiful fragrance, £350; or the Youth Dew Timeless Cameo compact, £150. Both at Harrods in the UK.

The only affordable entry this time round: from Marc Jacobs, a solid perfume bracelet in the Lola fragrance. $45, due to launch in October. (via cosmeticworld)