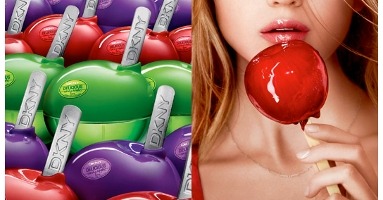 Donna Karan's fresh apple fragrance, DKNY Be Delicious (2004), has spawned a multitude of flankers and collector editions, of which the Candy Apple Trio — Ripe Raspberry, Sweet Caramel and Juicy Berry — is the latest. Apologies to its fans, but the original is not a favorite of mine, and of the flankers, only Delicious Night really captured my attention — and even that one is not really something I would wear. So I suppose you should take the following with an even larger grain of salt than usual?

DKNY Delicious Ripe Raspberry Candy Apple (red bottle, shown below; with notes of apple, lime, peony, lily and cola accord) is not as berry-ish as I'd expected — there's much less berry than in Delicious Night, although this fragrance also has a much paler, fresher base so there's less to counteract what berry there is. A nice shot of citrus in the opening keeps it from being too sweet while the raspberry calms, and overall, Ripe Raspberry strikes me as more fresh than candied. The heart is sheer florals. I'm not sure I would have recognized the "cola accord" in the base (and mind you, you get there after about 15 minutes) as "cola", but whatever it is, it's sort of fun, and if they want my vote, I say that the next series of Delicious flankers should be based on popular soda flavors.

Verdict: My favorite of the three, but still nothing terribly exciting. Wearable and worth a shot if you're after some variation on fresh apple for spring or summer.

DKNY Delicious Sweet Caramel Candy Apple (green bottle; notes of apples, pears, marshmallow, jasmine, lily of the valley, violet leaves, caramel and vanilla) is much sweeter than the Ripe Raspberry, especially in the top notes, where lots of pear mingles with lots of sugary candy — this is the only one of the three that comes even close to being as sweet as you might have guessed (or feared) after watching the fun, but cavity-inducing commercial. Most of the caramel hit me in the opening (and thankfully, a whisper of something like melting plastic was short lived), but the woody-musky dry down retains a vanillic warmth, and the floral notes, while mostly indistinct, have more of a presence here than they do in the Ripe Raspberry.

Verdict: Sweet Caramel is arguably the most fun of the three, and if you're really after candy, this one is your best bet.

DKNY Delicious Juicy Berry Candy Apple (purple bottle; notes of currants, lychee, pear, blackberry, rose, apple blossom and sandalwood) opens sweet, fruity and strong, but from the start, the fruit is layered over assertive wood notes, so it doesn't come across as fresh (Ripe Raspberry) or candied (Sweet Caramel). The dry down is the darkest of the three fragrances, but also the blandest, and I have a hard time thinking of anything to say about it except "berries" and "wood" and "musk".  If you've ever smelled a single variation on blackberry musk, you already know this story and you've heard it told better elsewhere.

Verdict: Easily my least favorite of the three. It smells like it could be a cheap knock-off of Delicious Night. 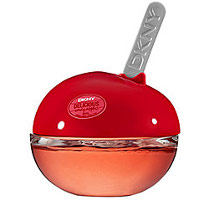