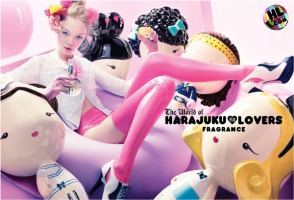 As long as I'm buying a perfume anyway, I'd just as soon have it in a pretty bottle — I mean, why not? And if I'm dithering over whether or not to buy something, a pretty bottle might just push me over the edge. Still, I'm not what you'd call a bottle hound. I've never bought anything just for the bottle before, and ultra-luxe packaging doesn't generally interest me beyond the fun of oohing and aahing over the picture. I'd certainly never pay extra for it if the scent was available in a cheaper version, and fragrances that are only available in ultra-luxe trappings set off my worst cynical leanings. I'm not entirely immune to "must have it" perfume packaging, though: turns out all you have to do is suspend 5 molded plastic doll's heads inside a cardboard gift box with a clear plastic top, and I'm a goner.

Yep, I'm here to admit that I smelled all five of Gwen Stefani's new Harajuku Lovers fragrances, found them generally wanting, took a good look at the coffret of solid perfumes and had one paid for, wrapped in tissue and ready to go in a matter of minutes.

Strictly speaking, of course, these don't really qualify as pretty. They're cute, as in "a fatal attraction to cuteness", the collection's tag line. The Harajuku Lovers set was inspired by the youth-oriented street style of the Harajuku district in Tokyo (and if the whole kawaii thing is still a mystery to you, you might want to check Wikipedia's entry on Cuteness in Japanese culture). At any rate, the set didn't kill me but it did cost me $60, and I would say that unless you're entirely immune to the appeal of Sanrio-type* merchandise, you might best just stay away from the Harajuku Lovers counter until it's all over**.

So, what of the scents themselves? Well, it should go without saying that anyone expecting that masterpieces of perfumery might be found packaged in molded plastic dolls for $25 a pop (the price of the 10 ml bottles) is bound to be sorely disappointed. I should think all that was necessary was to come up with fragrances that weren't actually repulsive, and they've managed that. Brief reviews are below, listed in order of my preference from least to most; do bear in mind that while I smelled all of the Eau de Toilettes on paper, with the exception of G I smelled the fragrances on skin only in the solid perfume form, where they're likely to have less sillage (and that was just fine with me):

Baby is advertised as a "powdery musk", and you can probably already guess that it smells pretty much like baby products, although it's slightly more floral than your average baby lotion. It's soft and clean and generally nondescript. It was my least favorite of the 5, and I was told that it was not selling as well as the others. Too bad, as I love her bumpy hair. Still, if you need to buy one of the Harajuku Lovers for a child who is really too young to be wearing perfume, it might be your best bet.

Love is supposed to be a "sensuous floral". What can I say? I mean, it would be kind of creepy if there really was a sensuous floral inside a plastic doll with hot pink hearts in her plastic bouffant hair, wouldn't it? Fear not, it's a pale, sweet-ish, musky blended floral with fruity undertones; after about 30 minutes, it's mostly bland musk. It has more personality than Baby, but not much, and it wouldn't be inappropriate on a young child either.

Lil' Angel is the fruity floral entry in the collection. It's a candied fruit fragrance of no particular distinction, and while it's a bit sweeter than I like, it isn't the sweetest thing at Macy's. It's got considerably more energy than Baby or Love, and I'd guess it's more likely than either of those to please its target market. It sort of fizzles out after about 30 minutes, in the solid form at least, but it's fine for what it is.

Music is meant to be a "delicate floral", and that's just what it is. Like Stefani's LAMB L, it's heavy on the pear and sweet pea, but Music is a sweeter scent, with more vanilla sugar and less "fresh" stuff (or perhaps the fresh stuff just doesn't come across in the solid). I wish I had thought to ask how this one was selling; it isn't exactly what I'd call distinctive, but it feels a bit less generic than Baby, Love or Lil' Angel. Like the others, though, what personality it has in the solid form mostly vanishes within the hour, leaving a trace of wan musk.

As I understand it, G is the doll meant to represent Stefani, and she clearly saved the best juice for herself. G is a creamy tropical gourmand, heavy on the coconut, and as has been pointed out on MakeupAlley, reminiscent of Bath & Body Works' Coconut Lime Verbena fragrance crossed with some clean cotton-y musk. It's not high art, but it's fun.

G was the only one of the 5 that I tried on skin in both the solid and the Eau de Toilette forms. The Eau de Toilette is a considerable improvement over the solid: the citrus top notes, almost impossible to make out in the solid, sparkle in the liquid form. The solid takes longer to bloom on skin; when it does, it feels comparatively flat, and it doesn't seem to last as long. Still, the solid is basically true to the scent.

My advice: if you're buying mostly for the packaging, the solids are fine. If the juice is what you're after, buy it in the liquid form.

The Gwen Stefani Harajuku Lovers fragrances are available in 10 ($25) or 30 ml ($45) Eau de Toilette, or in a coffret of 5 solid perfumes ($60). They can be found at most major department stores.

The poll: did you ever buy a perfume just for the packaging, and if so, what was it? Did you regret it later?

*Hello Kitty always made my skin crawl, but I confess there was another (no doubt equally ridiculous) Sanrio character that I adored. Luckily I can't remember which one or I'd probably be buying a pencil case on eBay right now.

**Except that Gwen Stefani says on the Harajuku Lovers website (which, by the way, locked up Firefox twice) that "Harajuku Lovers can be anything that inspires me...anything that I want. The line is endless and is going to just continue to grow". So, it may never be over. Consider yourself warned. All I can say is that she's got my $60 and I've got my 5 doll heads, and while I have no regrets about the transaction, as far as I'm concerned, our relationship is over. If I ever do buy more of them, you can be quite sure I won't admit it here.