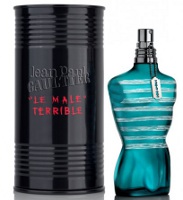 Jean Paul Gaultier will launch Le Mâle Terrible in October. The new fragrance for men is a flanker to 1995's Le Mâle.

Le Mâle Terrible was developed by perfumer Aurelien Guichard, and is described as Le Mâle pushed to extremes. The notes include grapefruit, pink pepper, lavender, vetiver, vanilla and amber.