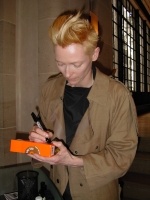 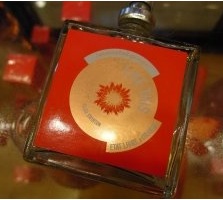 Like This, the fragrance collaboration between actor Tilda Swinton and niche perfume house Etat Libre d’Orange, recently launched in the United States. Etat Libre’s founder, Etienne de Swardt, made appearances at New London Pharmacy and Henri Bendel to introduce the fragrance and to reveal more facts about Like This; for example, its “code name” as a work-in-progress was “Immortal Ginger.” And the final name, in addition to being borrowed from a poem by Rumi, is a bit of wordplay on Tilda Swinton’s request for a “cozy” scent, since the sound-alike Italian word “così” translates as “like this.”

Tilda Swinton herself made a visit to Henri Bendel on June 17. I was able to speak with her for a few precious minutes, and I asked her to imagine fragrances for three memorable characters she has played in films.

Orlando: "Oh, I think he would have worn Like This. Because of the colors---he's all orange and gold. And because Orlando is very personal to me, and this fragrance is very personal, really a 'home brew.'"

The White Witch (from The Lion, The Witch, and The Wardrobe): "The smell of snow. Different kinds of snow. I didn't previously know that could be done, being a newcomer to this fragrance-making world, but now I know it can!"

Emma Recchi (her character in I Am Love): "The scent of her lover."