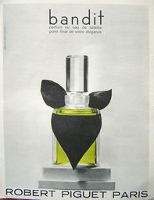 Not long ago I visited some friends who had bought a new painting. We stood in the living room and admired it. It was a portrait washed in beige and brown by a local artist, and it was, well, nice. I looked around. The room was pleasant — comfortable couch, matching chairs, smart books, a framed poster of an opera — but something seemed to be missing. The room lacked inspiration. On the way home, I thought of the missing ingredient: wit.

Not much later I met a friend of a friend. She was smart, had marvelous taste, told fascinating stories, and loved to gesticulate, cigarette in the air, about some political issue or another. I liked her, and yet I knew we would probably never be close friends. Why? There was no humor, no wit about her.

Likewise, perfume can contain wit — or not. Some fragrances are grand compositions, but don't feel personal. I still can't get comfortable wearing Rochas Madame Rochas, for instance. Even though I admire it, it feels too of-a-piece. Other fragrances seems totally without wit and are stamped-out versions of some predictable formula. Just insert the latest celebrity fragrance here.

Still, some perfumes invite you in with something askew, something unexpected, a little bit of soul. To me, Edmond Roudnitska was the master of creating fragrances with wit. Take Christian Dior Diorella, for instance. It is repulsively beautiful, all lemon, herbs, and salty, rotting meat. It's somehow refreshing and past its expiration date at the same time. It makes me laugh, and I love it. Roudnitska's Rochas Femme throbs with an overdose of fruit and sex. I love it, too.

But before we go on to more perfumes with wit, let's examine wit more closely. I realize some people might see wit as the ability of some too smart, sarcastic people to cut down others. That's not what I mean. Sure, Oscar Wilde is witty, but I think he'd be terrifying to know personally. Wit isn't exactly humor, either, since humor can be flat out slapstick, and that's not what I mean.

I think Mark Twain best summed up my view of wit when he wrote, "Wit is the sudden marriage of ideas which before their union were not perceived to have any relation." Wit is the piece that surprises, and yet still feels perfectly natural. Wit can be ugly, occasionally kitschy, shocking, or humorous, but when you experience it, your reaction is likely to be "Why didn't I think of that?"

In the living room I wrote about above, wit might have been a framed quartet of 1960s paintings of strangers above the couch, or letting the mutt lounge on the son's old Star Wars sheet on the couch, or even the first season of Mission Impossible next to the television set waiting to be watched. For the friend of a friend I mentioned above, wit might have been the ability to laugh at an absurd situation instead of turn it into something personal, or to enjoy beer with pigs in a blanket instead of insisting on the Wine Spectator's most favored new release. Life is ridiculous and full of possibility, and that's its beauty.

Perfume with wit steps out of predictable territory and yet still can be startlingly beautiful and dignified — or goofy but fun. Thierry Mugler Angel is surely a prime example of perfume with wit. Who would have thought cotton candy and patchouli could be so intriguing? Givenchy L'Interdit must have been witty in its day when strawberry was laughable for a couture perfume. Germaine Cellier churned out witty fragrances by playing on extremes: Piguet Bandit hyped galbanum and leather; Balmain Jolie Madame daringly mixed delicate violet with tough leather; and the original Balmain Vent Vert was teeth achingly green. Today, Serge Lutens often adds wit through his funky opening notes: gasoline for Tubéreuse Criminelle, burnt rubber for Cuir Mauresque, cumin in Fleur d'Oranger, and so on.

Sometimes wit is more subtle and makes itself known by the artist's style. Bertrand Duchaufour is on a streak of splashing his singularity — and so his wit — across some of his recent releases. Vero Kern and Andy Tauer cleave from the expected but follow a consistent style that reflects their aesthetics, and so their wit. And I always love to see what Comme des Garçons is up to.

Even if a fragrance is beautiful but staid, you can still wear it with wit. That's part of the beauty of perfume. Fragrance when worn is part of something greater. The goth beauty wearing Chanel No. 5 or the grandmother reveling in Britney Spears Curious are the height of wit. Maybe that's the lesson here: wear perfume like you own it. Make it part of the crazy, individual person you are. Wear it with wit.