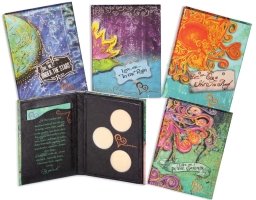 Lately there's been a wave of magazine and newspaper features discussing the rise of the solid perfume "trend." Of course, solid perfumes have been around since ancient Egypt, and they were revived in the twentieth century through the efforts of Molinard, Estee Lauder, and Avon (to name just a few examples), but it does seem that more and more companies are offering solid fragrances right now. I'll admit that I haven't tried very many solids, other than a cherished Youth Dew "cameo" compact and some wonderful Crazylibellule and the Poppies Crazysticks. I'm generally more of a "spritzer." However, the new perfume palettes from Love, Me Scents caught my eye. They're packaged in sturdy little cardboard "books," similar to the makeup palettes sold by companies like Too Faced and The Balm, and the one called In the Garden has a Klimt-inspired cover design, embossed with gold ink. I can't recall any other company releasing a solid perfume palette, except Sonia Kashuk for Target, and I've never been able to find those in person.

Each Love, Me palette includes three scents, a card with suggestions for layering the fragrances, and some mood-setting text. In The Garden's "story" is a steam-of-consciousness list of childhood memories about playing outside in the summertime, including "ladybugs & polka dots, lemonade, raspberry jam... butterflies in the air..." I was glad to find that In The Garden's trio of fragrances was less little-girlish than the accompanying verbiage. The three scents are named Earth, Whisper, and Sweetness. Earth is the most complex and intriguing one. It's described as "clean, fresh, grass," but its "fresh" green top is mixed into something duskier and more dirt-like, in addition to a peppery white-floral note, so that you really do get the effect of a shady garden with just a stroke of your finger. Whisper, listed as "vanilla, musk, honey, neroli," turns out to be a subdued little cousin to the infamous Thierry Mugler Angel. It definitely has cocoa and patchouli as well as the honeyed musk note, but it's a much more  easygoing way to wear the Angel idea. Sweetness is the simplest and lightest of the palette's three components, a bouquet of "honeysuckle, rose, jasmine" with a dominant honeysuckle note and some ylang ylang hovering behind it. 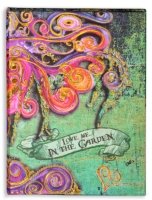 I didn't specifically plan this review to run on Mother's Day weekend, but come to think of it, this palette would make a nice little gift for a mother, sister, or female friend who wants to experiment with scent. It would also be appreciated by anyone who wants to keep her fragrance subtle, who travels often, or who just enjoys whimsical packaging. The fragrances are blended into a gentle base of safflower seed oil, beeswax, and shea butter, and their aromas stay close to the wearer's skin. The scents don't last especially long, but they can easily be refreshed, especially if you carry the palette with you — to work, on a vacation, into a real garden, wherever you please.

Love, Me...In the Garden solid perfume palette sells for $25 at the Love, Me website.