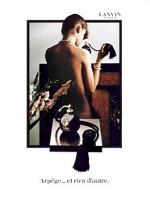 Last week at the invitation of my perfume-loving friend, Diana, I assisted at a presentation on perfume and gender for the Gender Studies Symposium at Lewis & Clark College. The presentation was in a long, stuffy room which soon filled with students. Most wore jeans and hoodies. One sat cross-legged and knitted.

Once the room quieted, I asked how many of the students wore fragrance. A few hands crept up. "What do you wear?" I asked. The students hesitated, but one of the men volunteered he liked the Burberry scents. Another man admitted to Axe. A professor said she'd been wearing China Rain perfume oil for years.

A little later in the presentation, we handed out cards spritzed with fragrance for the students to guess, without knowing the name of the scent, whether the fragrance was marketed to men or women. I wasn't surprised so much at their guesses — they were right about half the time — but at how much they loathed the classics. Christian Dior Miss Dior got a definite thumbs down, and Lanvin Arpège elicted gagging noises. All of the students had heard of Chanel No. 5, but none could describe how it smelled. On the other hand, CB I Hate Perfume Black March and L'Artisan Parfumeur Tea for Two intrigued some of the students, maybe because they recognized the concepts behind them.

Wow, I realized, I am really, really out of the mainstream in regards to perfume. It seemed high time for a reality check. I started asking friends and even strangers if they wore perfume, and if so, what it was.

One friend, the enviably chic Joanne, is a Guerlain Jicky fan — Eau de Toilette, not Parfum, she says emphatically. A woman at work likes Boucheron, but is looking for another scent to wear, "something with patchouli. I really like patchouli". Speaking of patchouli, a male friend who moonlights as the entertainer Miss Mylar is a big fan of Bond No. 9 H.O.T. Always. A stranger I talked to, a woman shopping for shoes, loves her Givenchy Amarige. (As she pulled on a boot, she said, "Do you think companies make perfume that women like, or that men like?")

But most of the people seemed surprised I cared about perfume at all. One woman's response was typical: she said she had a nice perfume, one she really liked, something French, but she couldn't remember its name. She said she'd have to go home and look at the bottle.

I know I like perfume more than most people. But I'd lost touch with how small a role, if any, perfume plays in most people's lives. Often I'm surprised at the popularity of certain things — the word "utilize", crocs, and thirsty-two ouncers of soda are a few examples — and it's good to be brought back to reality once in a while.

At the end of the perfume and gender and fragrance presentation, most of the students beat a path to the exit, but a few hung back. One pretty, quiet-voiced woman poised her pen over her notebook and asked which perfume lines were best. She wore Ralph Lauren Romance, but would like to try some other fragrances. And what was that perfume I mentioned — Une Rose? by Frédéric someone? Another woman held up one of the strips sprayed with fragrance. Her pen was also ready. "What was this one?" she asked my co-presenter as she sniffed the strip again. "Angela?" Diana asked. "Which one was 21?"