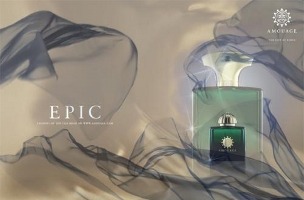 I wouldn't call Amouage an "edgy" house. Its perfumes aren't likely to surprise or tantalize conceptually. Still, Amouage fragrances have presence. Ubar is summer light and laughter; Jubilation 25 is carnal pleasure; Gold is glamour slashed with femininity; and Lyric Woman is passionate and a little bit moody. Amouage fragrances smell expensive, lush, and carefully crafted, and the house seems to ignore trends in favor of making perfume to suit the seasoned person. Ingénues should look elsewhere.

Epic is warm, thick, and fuzzy with smooth edges. Rose and sweet sandalwood balance Epic's sour oud and frankincense, and a dusting of peppery spices makes sure the fragrance never strays into olfactory tranquilizer territory. Epic starts not with perfume's traditional tickle of citrus, but with pepper and geranium, before settling into a rose-inflected blend of frankincense and rose, tinged with oud. Over time, the sandalwood steps forward. I can't pick out the cumin at all.

If this sounds like a description of Lyric Woman, the two fragrances do share common ground. To me, though, Lyric feels brighter, colder, and more distinct than Epic. Epic, on the other hand, is so silkily blended that when smelling it I visualize all its components woven together into a fragrant blanket. Lyric focuses more on rose and incense, while Epic favors spice and sandalwood. Lyric feels like a stained glass window, while Epic feels like a chunky but formfitting sweater knit from Italian merino wool the color of dark honey. Lyric broods, and Epic comforts. (Attention potential Eau Faux contestants: there's plenty of inspiration in the intro to Epic on the Amouage website. Lyric is described as the stop on a journey where a woman loses her soul, and Epic is when she rises from the Lyric's underworld and sets off on the Spice Trail.)

I was lucky enough to snatch a travel sized bottle of Jubilation 25, and my most expensive fragrance purchase is my cherished bottle of Lyric. I could definitely stand decants of Ubar and Jubilation XXV, too.  If money were no object — currently, a 1.7 ounce bottle of Epic Woman is $265 — I'd add a bottle of Epic to the list. I know I'd use it often. However, I have other perfumes that give Epic's soothing, cashmere mousse feel, although they take a different route to get there. L'Artisan Parfumeur Havana Vanille gives a similar vibe, although not as luxuriously, with vanilla, tobacco, and hay. Ormonde Woman gives the feel, too, but through truffle, moss, and grassy hemlock.

Epic Woman lasts a good, long day on the skin, and although it's classified as a feminine, it would make a terrific masculine. It's a wear-anywhere scent, although it could be overwhelming in hot weather. For information on where to buy Epic Woman, see Amouage under Perfume Houses.