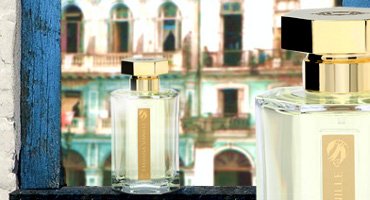 One afternoon last week, I sat in a dentist chair waiting for part two of a root canal. I was nervously flipping through an old People magazine when I found a paragraph about the new Frédéric Malle Editions de Parfums boutique in New York. In the article, Malle recommended a person choosing a perfume look for one that mingles with the person's skin. He said the fragrance should become a part of him or her.

I know just what Malle means. Sometimes, when a perfume marries well with the person who wears it, the scent becomes part of the person. It isn't something that stands out on its own. Instead, it's a few more brushstrokes in the person's complete portrait. For instance, one of my friends wears Annick Goutal Eau d'Hadrien well. When I'm with her, I don't notice her fragrance right away, instead, I take in all of her. At some point, it occurs to me she smells good, in a way that seems perfectly natural.

This principle applies to more than just fragrance. Hair, makeup, clothing — they work best when you wear them instead of the other way around. A dress that outshines you or is gorgeous but clashes with your skin or character tells the world you have a great dress, but maybe not a great dress for you.

That said, at least a good half of my fragrance wardrobe is made up of perfume with its own personality, and it isn't always mine. That's all right. Sometimes it's fun to wear fragrance as an accessory with its own attitude. Maybe I'm not 100% MAC Naked Honey on a summer's day, but sometimes it's a mood I want to extend. Or maybe I'm not really much of a Hermès Calèche person, but that won't stop me from wearing it when I want to add its elegance and control to my natural bit of jumble.

A few fragrances, though — Guerlain Vol de Nuit and Ormonde Woman are among them — really do seem almost to disappear on my skin, then re-emerge as another facet of who I am. Someone who only has a bottle or two of scent would probably be wise to take Malle's advice and look for perfume that will add a harmonious layer, to the point that it becomes indistinguishable from who she is.

When I emerged from the dentist's office, the clouds had thickened to the color of pencil lead, and the temperature had dropped. I had a tired jaw, a rattled skull (dentistry may have come far, but it's still pretty barbarous), and a serious need to stop by my neighborhood perfume boutique. Over the past month, I'd used up two vials of L'Artisan Parfumeur Havana Vanille. It was shaping up to be one of those scents that would complement me rather than sit on my skin like a layer of wrong-flavored frosting.

Half an hour later, luxuriating in skin-vanilla and warm comfort, I had a bottle of perfume Frédéric Malle would approve of, even if it wasn't from his line. I knew I'd reach for it whenever I didn't want to think about what perfume to wear, because it would always fit. My mouth felt better already. It began to snow.