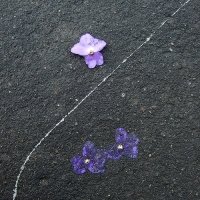 The trend-setting cosmetics company MAC recently released a fall trend collection inspired by urban architecture, including makeup in a palette of charcoal gray, slate blue, and deep plum, as well as a fragrance called Asphalt Flower. Asphalt Flower is billed as “a limited-life scent as bold and urbane as the modern metropolis,” in which “glossy violet and iris petals cast an ebonized sheen over dark clouds of vanilla and patchouli.” (As Robin has previously noted, it may or not be exactly the same MAC fragrance released under this name in 1999; I missed the chance to try that earlier iteration, so I can’t verify this theory either way.)

Asphalt Flower is packaged in a sleek, portable roll-on dispenser of shaded gray glass. It looks androgynous and urban, and it smells that way, too. Yes, there is a candied-violet note in the opening phase of the fragrance’s development, but within a few minutes, it’s surrounded by dusky swirls of incense. Some powdery iris and heliotrope notes emerge a little later, and they flirt with the violet and incense but never dominate the composition. The longest-lasting part of the fragrance is a smoky-sweet blend that stays close to the skin. The patchouli note is just a faint murmur under the floral-incense notes, and the vanilla doesn’t appear until the final phases of the fragrance’s development. MAC is known for its predilection for vanilla — its lipsticks, in fact, are vanilla-scented — but there’s not enough sugariness in Asphalt Flower to turn it into a gourmand violet along the lines of Alexander McQueen’s MyQueen (which I remember enjoying, although I must have been in the minority, since it was discontinued so quickly).

If Asphalt Flower were an item of clothing, it would be something like a basic black sweater: simple, gender-neutral, and casual in a modern way. Despite its poetic name, it’s not necessarily a “statement piece.” If Serge Lutens’s variations on woody violet are too dense (and costly) for your taste, or if you liked the idea of Love in Black but you were put off by Creed’s pretentious image (and, again, the price tag), Asphalt Flower may appeal to you. I personally prefer Sonoma Scent Studio’s Voile de Violette, which is a bit more mysterious and has better staying power, but Asphalt Flower still appeals to me. It’s surprisingly unisex for a fragrance that you can find at a department store, it feels suitable for autumn, and it’s reasonably priced — not so cheap per milliliter, if you do the math, but still less than a luxury lipstick or any other must-have fall accessory.

MAC Asphalt Flower sells for $20 for 6 ml at MAC cosmetics counters and boutiques, or online at the MAC website and Dillards.