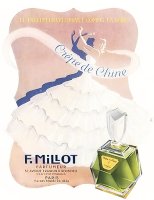 A few nights ago I watched Silk Stockings, a musical set in Paris. It stars Fred Astaire as a movie maker and bon vivant, and Cyd Charisse as a Russian commissaire sent to Paris to bring home a famous Russian composer whom Astaire has hired to write the score for his new movie. The main subplot of the movie is how Charisse is transformed from a stern Communist who cares more about seeing Paris’s sewer system than Cartier to Astaire’s champagne-drinking, couture-wearing bride.

In my favorite scene, Charisse is alone in her Parisian hotel room. She cancels a meeting, turns Lenin’s photo face down, hesitates, and then pulls out a pair of silk stockings she had hidden in a cabinet. She yanks off her Soviet woolen tights, wafts the silk stockings against her bare legs, then dances (so, so fabulously) through the room. She then lifts a cushion on the couch and draws out a chiffon slip. Next she dances to a table, reaches into an urn and in a smooth, quick motion produces a girdled belt. She is intoxicated with the idea of dressing herself in silky, forbidden lingerie. She feels beautiful, and you feel it with her.

The next day I was working at the vintage clothing boutique and Liz, the owner, called me from an estate sale. “Angie?” she said, “There are some really old boxes of perfume here. It looks like…let’s see…one called My Sin? And Crêpe de Chine? There’s some others, too.”

“Buy them!” I shouted. “I’ll pay you back!” A few hours later Liz came into the store with a bag full of her estate sale buys. She pulled out some Austrian cashmere sweaters, a pair of green stilettos (“Shoes of Consequence” the label inside said), some Italian cocktail rings, a couple of black cloche hats, and then there they were: a quarter ounce of Millot Crêpe de Chine extrait, a quarter ounce of Lanvin My Sin extrait, and a half-ounce bottle of My Sin bath oil, each still in its unopened, cellophaned box.

At home, I opened the Crêpe de Chine and smelled a whole other world. The perfume was in perfect condition — not a given since it was discontinued forty years ago. I smelled a perfume-y waft of aldehydes and citrus, then a slightly powdery, spicy floral with a damp sandalwood, oakmoss, and animalic base. It was as if I’d walked through a rip in time’s fabric and come out on a busy boulevard in autumn in Paris in the 1950s. I dabbed more on my wrists and left for a dinner party. I felt sophisticated and beautiful. I knew just how Cyd Charisse felt in Silk Stockings.

That night after the dinner party and a hot bath, I pulled a vintage chiffon nightgown out of an upper shelf in my bedroom closet where it had been for at least a year. I loved the nightgown, but it always seemed a little ridiculous — too frou frou — to actually wear. That night, though, I wore it to bed, the Crêpe de Chine faint but still lush on my skin.

Postscript: Liz went back to the estate sale the next day when everything was half off and bought the rest of the perfume. So now, besides My Sin and Crêpe de Chine, I have a 150 ml bottle of Worth Je Reviens Eau de Cologne in a globe bottle with a glass stopper; a 100 ml bottle of Guerlain Mitsouko Eau de Cologne in a round, flat bottle; and a (sadly) dried out 1/6 ounce purse atomizer of Lanvin Arpège parfum that I plan to fill with new Arpège soon. Liz kept a four-ounce bottle of Dior Fraiche Eau de Cologne that smells like lemon, bergamot, and lavender. All of these bottles seem to be from the 1950s. If I could dance euphorically around my living room with any grace, I would. Cyd Charisse has nothing on me.