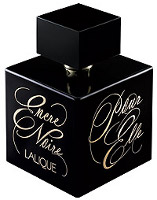 Because Lalique does not spend on advertising, preferring instead to invest in the fragrance itself, the company gave Nagel a completely free rein for the fragrance, with the proviso that she used vetiver, the key note of the male fragrance, and feminised it with floral notes.

Nagel said that normally such a brief would take a year to fulfil, but in this case it took just six months.

Lalique Encre Noire pour Elle will be available in 50 (£55) and 100 (£71) ml Eau de Parfum and in a limited edition Parfum (99 numbered bottles, £600). (quote via cosmeticsinternational, additional information via cosmoty.de)