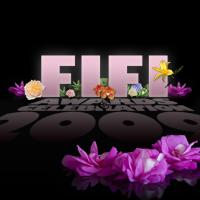 Thanks to a friend with ample airline miles and a niece with an apartment in New York City, I went to the FiFi Finalists award breakfast on Friday. So, instead of the usual Monday perfume review, I'll give you an inside peek at all the important aspects of the breakfast: what it is about, who was there, and what was in the goody bag.

The Fragrance Foundation bills the FiFis as the fragrance industry's Oscars. At the finalists breakfast, the top five entries for each of the awards categories are announced along with the winners of the awards for editorial excellence and for technological breakthrough. Although both the Oscars and the FiFis incorporate celebrities and prizes for excellence, the FiFis are less about art and more about sales. After all, the Oscars don't offer prizes for Best Packaging and Best National Media Campaign. As an executive for Cosmpolitan magazine said in her opening remarks at the breakfast, "The creative marketing talent in this room can create the sweetest smell of all: the smell of success."

That said, for the perfume industry to survive, it needs to be strong. Plus, the FiFis do include prizes for best fragrances in several categories and for editorial excellence. I submitted work to be considered for an award, and that's how I ended up receiving an invitation to attend the breakfast. It cost me $100 to attend the breakfast (industry people paid $170 each) and they waived the requirement to be a member of the Fragrance Foundation. Since my airfare and lodging were essentially free, I forked over the money to attend. After all, who knew who I would meet? Perfumers, maybe, and people who wanted to talk about fragrance.

Wrong. The breakfast was loaded with marketing and public relations staff from the cosmetics industry, and I'm willing to bet few of them shared our over-the-top love of scent. Most of the attendees I encountered looked my way and moved along, savvy to the fact that I wasn't worth networking with. I was listed in registration under "No Smell This", and my vintage clothes and messy hair stood out, not in a good way. I'd say about 80 percent of the attendees were women, most of them with chunky highlights and in teetering heels, and many of them dressed for cocktails. It was eight thirty in the morning.

The breakfast was at the Mandarin Oriental Hotel in the new Times Warner building at Columbus Circle. The conference room, a floor above their famous lobby on the 35th floor, had a staggering view of Central Park and midtown. It was the first clear, warm day of spring, and the trees in Central Park were dotted with the chartreuse hints of leaves. Round tables set for breakfast splayed in semi-circles facing the windows, in front of which was a dais. I'd guess the room held 35 tables with about ten people at each table.

The mistress of ceremonies was from a local news station. She was tiny, blond, and blow-dried and had a melodious announcing voice; French words presented a serious challenge. She was a natural for Juicy Couture, but I'm guessing she opted for something more expensive, like Frédéric Malle Carnal Flower. Victoria from Bois de Jasmin won Editorial Excellence for Blogs for her marvelous "Scent of Cities: Kiev". I've read her religiously for at least three years and was excited to see her in person as she went to the stage for her award. She's small, gamine-beautiful, and brunette, and she stood out like a wild violet in a pile of supermarket gardenias.

When the breakfast was over, throngs of ladies choked the lobby for the few available elevators. I found a side table to root through my goody bag while I waited. The idea behind the bag was that it would include samples of all the fragrance nominees so that Fragrance Foundation members could test them before casting their votes. I was excited, seeing that Chanel Beige, Acqua di Parma Profumo and Guerlain Les Elixirs Charnels Gourmand Coquin were nominees. Unfortunately, they weren't in the goody bag. I did find samples of Amouage Jubilation 25, an Etat Libre d'Orange, and the three Karl Lagerfeld Kapsules, but most of the rest were mass market brands. I gave the nearby security guards a few samples to take home. Still, I left with over five pounds of loot. You can look forward to a review of Avon Bond Girl 007.

Was it worth $100? Would I do it again? I don't think so. I'm more interested in perfume itself than in marketing perfume. Still, I'm glad I went. I feel like I was granted a look behind the curtain. With RuPaul as emcee and a few more tables filled with bloggers, this event could be a lot of fun.

Note: you can watch the 2008 FiFi breakfast at the FiFi Awards channel at YouTube; presumably they'll eventually post videos of this year's ceremony as well.