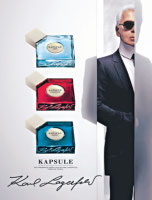 Karl Lagerfeld will launch Kapsule, a trio of mix 'n match unisex fragrances, this coming November. It is his first fragrance project under new licensing arrangements with Coty; a company representative noted that...

Lots of people are doing three fragrances, but only at an expensive price, as a limited edition. Here, the idea was to say we will propose a capsule wardrobe of fragrances...at a price that is in line with the market.

Kapsule Light was developed by perfumer Mark Buxton, and has notes of bitter orange, jasmine, nutmeg, clove and musk.

Karl Lagerfeld Kapsule will be available in 30 and 75 ml Eau de Toilette, and will be exclusive to Neiman Marcus in the US through early 2009. (via wwd)