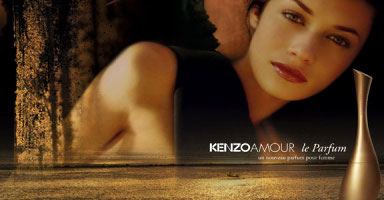 Amour Le Parfum is Kenzo's new limited edition Parfum (extrait) version of 2006's Kenzo Amour. It was inspired by the "gold of the Orient", if that helps you in any way, and was developed by perfumer Daphne Bugey, who along with Olivier Cresp created the original Amour fragrance.

Amour Le Parfum does for Amour what Kenzo Flower Oriental did for the original Flower: it sticks with the main theme but tempers the sweetness with a darker, woodier base. Amour's pale opening of cherry blossom and rice steam (other notes in the original: white tea, frangipani, heliotrope, thanaka wood, incense, vanilla and musk) is amped up and winterized with warmer notes (amber, incense, benzoin and patchouli). It is very dusty-resinous in the early stages, later, it's flatter and more ambery-woody.

I really liked Amour, but even I'll admit it was bland — I noted when I reviewed it that "as with rice pudding, it is the blandness itself that is compelling". If you sort of liked Amour, but disagreed with the "compelling" part (in other words, you found it too bland, too pale or too sweet), Amour Le Parfum may sway you. It's deeper, drier, less pudding-ish. Those of you who particularly disliked the heliotrope in Amour may not be so happy, though; to my nose, it's considerably more noticeable — it's not overwhelming, but there's a definite undercurrent of play doh in the dry down. 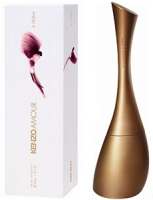 The bottle is the same gorgeous Karim Rashid design they used for the regular Amour and for the Amour Indian Holi flanker, done here in a handsome matte bronze-gold finish. I noted that the original, brightly colored Amour bottles fairly screamed "buy me", this one screams louder still.

It's going to be really hard to write a "Best of 2008" post this year — there have been so many new releases that just remembering them all will be a challenge — but I'm sure Amour Le Parfum will make the list.