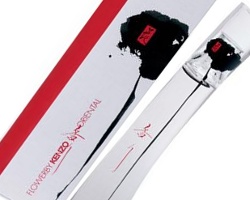 Flower by Kenzo, a perfume inspired by the (scentless) red poppy, was released in 2000. The Flower collection has since been expanded to include several variations on the theme, most notably Flower Le Parfum in 2003. This year Kenzo has launched Flower Oriental. Like the others in the Flower line, it was composed by perfumer Alberto Morillas. According to Women's Wear Daily, the fragrance...

...is based on Kyara, an extract of Asia's agar tree. The material is burned during a Japanese ceremony called Kôdô, which is translated as "listening to incense."

I suppose I should start by admitting than I am not a huge fan of the original Flower, which is simply too sweet and powdery to suit me. The Le Parfum version, which is more concentrated but also highlights slightly different notes than the original, is somewhat more to my taste, but it isn't something that I adore either.

Flower Oriental starts quite similar to the original Flower scent: a soft, sweet, powdery floral. As it settles, the powder calms, and it starts to take on dark woody undertones that temper the sweetness nicely. It smells like agarwood (oudh), but a subdued agarwood, completely stripped of its characteristic medicinal topnote. The wood slowly warms into a dry, smoky-peppery incense which obscures the floral top notes, leaving only indistinct traces. It is mildly spicy, with a dash of vanilla and a clean skin musk in the base.

It is a wonderful comfort scent for fall, very squishy-soft, and much lighter and closer to the skin than you might imagine it would be based on the notes. It has just enough powder to lend a velvety finish, but not so much that you feel that you have dusted it on, and there is just enough vanilla to balance the dryness of the wood.

It is still far drier, and probably far less feminine than the original Flower, and I wonder if fans of that scent will find Flower Oriental too masculine. Personally, I tried to amp up the wood notes a notch by layering with Yves Saint Laurent M7, another Alberto Morillas fragrance with agarwood. M7 is a rather heavy fragrance, and even a tiny drop completely drowned out the Kenzo, so I will have to keep working on the proportions. Even on its own, though, Flower Oriental is one of my favorites of the mainstream fragrance releases this year.

Flower Oriental is available in 50 ml Eau de Parfum for $70 at sephora and department stores. I will be waiting patiently for it to hit the discounters.

5 Perfumes for: Creatures of the Night
Powder cravings