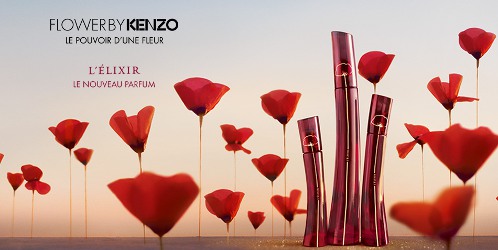 Kenzo launched Flower by Kenzo L'Elixir last year, and I preceded to pretty much ignore it. I did like a few of the earlier Flower flankers (Flower Oriental is my favorite of what I've tried so far, followed by Winter Flowers) but hours are few and perfumes, to say nothing of flankers, are many: you all know how that goes. But recently someone said in the scent-of-the-day that the Elixir was good, so I gave it a shot.

This one was developed to celebrate Flower's 15th anniversary, and it's billed as a "sophisticated gourmand floral". If you took that to mean "fruity sugar bomb with a few rose petals", you'd be right on the money. It starts with a little nip of citrus and a generous-and-then-some dollop of raspberry syrup, already cushioned on a variation of the base you'll remember from Flower, if you've tried Kenzo Flower. There is a short-lived thread of orange blossom, there is sheer rose, there is a touch of praline, there is vanilla, there is creamy powder.

As is the current fashion, it's sweet but not as rich or weighted down as all the foody notes make it sound. The dry down gets warmer and darker and more woody / resinous, with a little hint of spice. After an hour, it's more like a standard floriental, less like a modern gourmand. Still, enough of the soft vanilla powder remains to give it the feel of an autumn comfort scent.

Verdict: Right away I classified Flower L'Elixir as a potential 'guilty pleasure'. It's too sweet for me and I'd guess it's probably too sweet for your average perfumista, but all the same it's fun, and I enjoyed wearing it. If I had a bottle, I can see reaching for it on a chilly day and then trying to ignore the first 10 minutes. (In August, I doubt I could tolerate it so soon as that.1) If you've been after something new and sweet, you've got plenty of choices this year, but you might want to add this one to your sample list.

The quick poll: name your favorite fruity sugar bomb, if you have one.

1. If you want raspberries and sugar in August, do try Thierry Mugler Angel Eau Sucrée.